3km for every 1km of new road 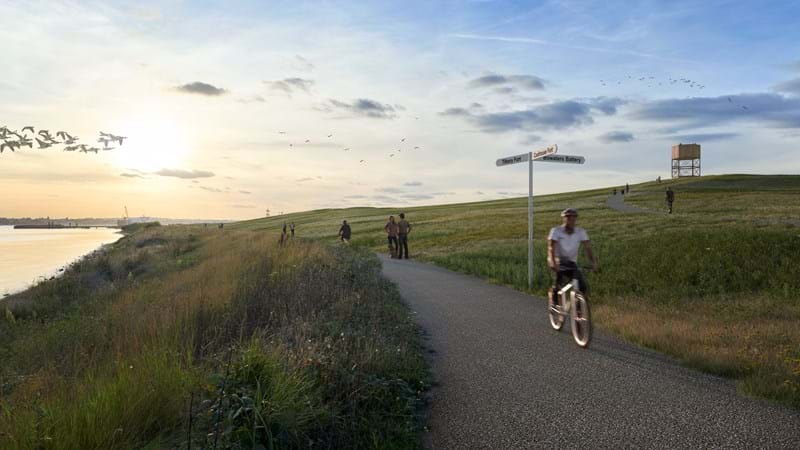 New artist impressions and maps released today (15 February 2022) show over 60km of new or improved pathways for walkers, cyclists and horse riders, that will be delivered in Kent, Thurrock, Brentwood and Havering as part of the Lower Thames Crossing project.

National Highways is one of the biggest builders of new pathways in the UK, and in total the Lower Thames Crossing will deliver almost 3km for every 1km of new road, designed to encourage active travel and promote health and wellbeing across the region.

The plans include new bridges and paths that will connect to upgraded and extended routes to give the local community and visitors easier and safer ways of travelling between the area’s parks and woodlands, heritage sites, and employment centres.

"...These will promote active travel and encourage health and wellbeing by better connecting local communities to the area’s rich network of parks and woodland, heritage sites, and places of work and study."

Emily Dawson, Head of Benefits for the Lower Thames Crossing

National Highways has also agreed to fund improvements to the wider public rights of way network, which would be delivered ahead of the Lower Thames Crossing project. These include the restoration of a missing link along the popular Two Forts Way near Coalhouse Fort in Thurrock that would be delivered by Thurrock Council, and supporting the Association of South Essex Local Authorities (ASELA) to improve the accessibility of the Coastal Path between Coalhouse Fort and Stanford-le-Hope.

“We’re designing the Lower the Lower Thames Crossing to work for all, and our plans include over 60km of new or improved paths for walkers, cyclists – almost 3km for every 1km of new road. These will promote active travel and encourage health and wellbeing by better connecting local communities to the area’s rich network of parks and woodland, heritage sites, and places of work and study.

Further information of the proposed pathways can be seen here, including new maps and artists impressions. The project is also holding events to give the local communities the chance to see the plans and speak to project staff. Some of the new paths have been proposed following feedback received during a consultation in 2021, and the public and stakeholders will have the opportunity to give feedback on these changes in a new consultation being planned later in the spring.

The proposed Lower Thames Crossing is part of the biggest investment in the country’s road network since the construction of the M25 in 1986. It will be an essential part of the UK’s low-carbon transport network, almost doubling road capacity across the Thames east of London, and boosting the economy by offering new connections, better journeys and fewer delays.

National Highways is designing the Lower Thames Crossing to have 80% of the route below ground or behind landscaped embankments, and proposals also include a new community woodland on Hole Farm in Great Warley, a new public park called Tilbury Fields in Thurrock, and over 260 hectares of additional woodland along the route – six times more than what will be affected by the new road.

Following feedback from Thurrock Council, the project has recently revised its plans near the river in Thurrock to support the Thames Freeport and is proposing a handful of refinements including updates to the proposed pathways for walkers, cyclists, and horse riders. The revisions proposals and any further changes to the Lower Thames Crossing plans will be shared with communities and stakeholders. It intends to submit its DCO application to seek permission to build and operate the crossing later this year.