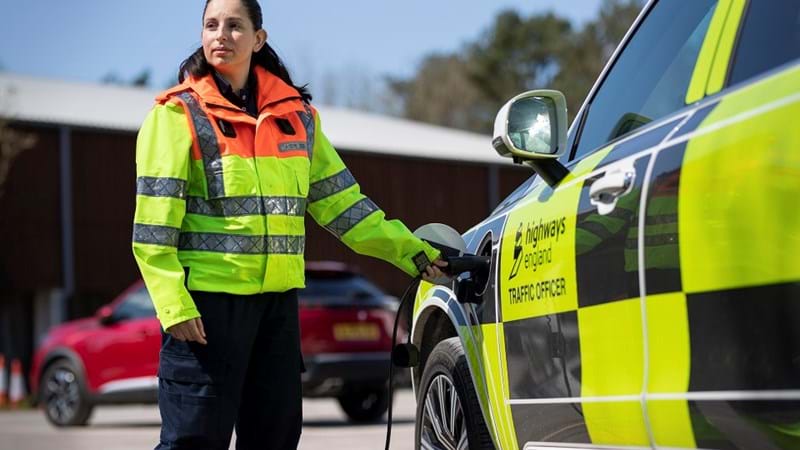 The new vehicles are set to cut around 250 tonnes of CO2 emissions a year and are being officially launched today, Clean Air Day.

The new vehicles modernise Highways England’s fleet, providing 4x4 capability and supporting a target to clear 86 per cent of motorway incidents within one hour, while reducing the company’s carbon footprint from patrolling England’s motorways and major A-roads to help keep motorists safe.

“We are delighted to be modernising our fleet with the 72 state-of-the-art vehicles that will not only reduce our emissions but also ensure that we are there when people need us most.

“Our traffic officers provide a 24/7, 365 days a year service and play an integral part of our operation and these vehicles will not only withstand the rigours of the role but are also cost effective, versatile, reliable and greener.

“This is just the first step in modernising our fleet, and we will continue to invest in green and electric vehicles as the technology becomes available, meeting the government’s Road to Zero strategy.”

"This is just the first step in modernising our fleet, and we will continue to invest in green and electric vehicles as the technology becomes available"

To help keep roads clear from obstructions and helping people on their journeys, Highways England has 270 traffic officer vehicles available – a key element of the company’s operations, supporting numerous activities to ensure the Strategic Road Network is safe for road users.

Following trials, in which traffic officers have put a PHEV through its paces, Highways England found that the vehicles perform as well as the traditional 4x4s currently used 24/7 365 days a year.

Eighty-two PHEVs – such as inspection vehicles and pool cars­ - have already been introduced across the Asset Delivery Fleet, with the new vehicles helping to shift the fleet in a greener direction and ensuring 25 per cent of the car fleet is ultra-low emission by 2022.

The 72 vehicles - Volvo XC90 Recharge T8 PHEVs and BMW X5 xDrive45e AC PHEV - will be rolled out across the network, including:

The vehicles have all been kitted out specifically for traffic officers, with enhanced storage capability, state-of-the-art lighting and distinctive livery, and will utilise an ancillary battery pack allowing the vehicles to run purely on electric or alongside the traditional combustion engine.

The vehicles, which can be plugged in or charged on the move, will allow Highways England to manage its emissions more efficiently; day to day, shorter journeys that require less power can be completed purely on the electric battery, resulting in zero emissions.

This will not only reduce our running costs dramatically but also the carbon footprint.

Elsewhere learner drivers in Coventry are among those benefitting from a super-charged green incentive funded by Highways England that allows businesses to try electric vehicles for free before they buy.

The incentive works by offering the businesses a free trial of electric vehicles for two months and is designed to encourage a shift to cleaner, lower carbon vehicles.

Following a successful pilot with the Energy Saving Trust and a launch with Leeds and Bristol City Council last year, Coventry City Council is among one of the beneficiaries of the investment alongside Kent, and Nottingham, which each setting up their own schemes.

In Sheffield local businesses can trial an electric van for two months for free, to let them “try before they buy”. The aim is to reduce the air pollution from small commercial vehicles on the strategic road network with thirty Nissan e-NV200s van being available.

It is among a host of measures Highways England is taking to improve air quality and tackle carbon emissions from road transport as the UK takes steps to become a zero-carbon economy by 2050.

The scheme has been made possible by Highways England’s Designated Funds programme designed to benefit people, the economy and the planet with an overall investment of £936m between 2020 and 2025.