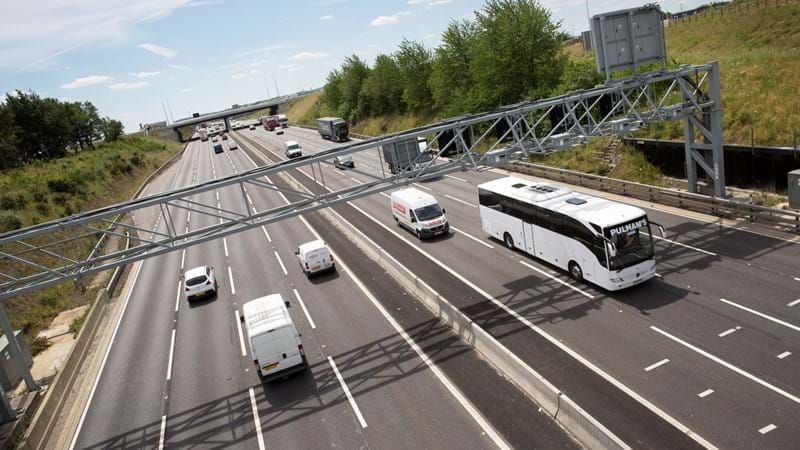 We're determined to reduce the number of incidents, and injuries, on our roads.

While England has among the best performing road networks internationally, there is always scope for further improvement.

The latest data shows that overall, in terms of serious or fatal injuries, smart motorways are our safest roads. We're continuing our work to make them our safest roads in every way.

We take road safety very seriously and have a strategic ambition that nobody should be harmed when using or working on the strategic road network.

Adapting to a changing world

Demand for journeys on the strategic road network has grown significantly in the past 20 years and is predicted to continue to increase. This is why smart motorways have been rolled out on some of our busiest sections of motorway across the country.

Our most recently upgraded motorways are also known as smart motorways because of the technologies and measures used to provide some of their extra safety features.

Smart motorways have introduced and use technologies and features not present on conventional motorways which help keep drivers moving safely.

This includes additional signs and signals which can provide extra information to drivers. They also have a system called MIDAS that identifies queuing traffic via detecting changes in traffic speed and flow using radars and loops in the road. In addition, ALR motorways have stopped vehicle detection (SVD), which is a relatively new technology and is being rolled out to all existing ALR schemes, and adds to the system of interrelated features to help further reduce the risks associated with live lane stops. This technology does not exist on other high-speed roads.

In 2019, the Secretary of State for Transport asked the Department for Transport to carry out an evidence stocktake to gather the facts on the safety of smart motorways and make recommendations.

We've continued to build on the work already undertaken, delivering on our actions and importantly, always putting safety first. And in May 2022 we published our Smart motorways stocktake second year progress report.

We know from feedback that drivers want to know more about smart motorways, how they operate and how they should drive on them.

A number of commitments were made in the 2020 Action Plan to give clarity to drivers. Over the past year we've worked with Department for Transport (DfT) and Driver and Vehicle Standards Agency (DVSA) to enable The Highway Code to be updated on 14 September 2021. This will help improve driver understanding and confidence when driving on a motorway.

We've also provided more information to drivers aimed at increasing awareness of how to drive on motorways. The update to The Highway Code, education campaigns and the launch of the ‘Driving on motorways’ hub have reached drivers up and down the country, helping provide a better understanding, and helping increase confidence, when travelling on all types of roads.

We're committed to providing even more information that is accessible to drivers.

Finding a safe place to stop

We want drivers and their passengers to be safer and feel safe on all our roads. We've listened to the concerns raised by the public about the spacing of places to stop in an emergency.

On smart motorways, as well as the introduction of technology (such as signs and signals that we can vary to display variable speed limits, red X, and driver information messages and the roll-out of radar stopped vehicle detection technology) the hard shoulder is replaced by emergency areas which are wider than a hard shoulder and set back from live traffic lanes.

Emergency areas are safer than hard shoulders, where one in 14 motorway fatalities happen. They are orange, set back from live traffic lanes and have an emergency phone which connects directly to our regional control rooms so help can be arranged.

Since March 2021 we've installed more than 330 additional signs so that by the end of September 2022 drivers will almost always be able to see a sign informing them of the distance to the next place to stop in an emergency.

Being safer in moving traffic

Since March 2021 we've worked to put SVD technology in place on over 100 miles of ALR motorway (It's in place at the point in time post-construction and following initial calibration where SVD alerts begin activating and are responded to within our regional control rooms. During this period we continue to calibrate the SVD system).

We're on track to complete the roll-out of SVD on more than 200 miles (in total) of ALR motorway by the end of September 2022. This means every existing ALR motorway will have the technology to allow us to more quickly respond and help drivers and their passengers who stop in live lanes. SVD is designed to detect a minimum of 80% of all stopped vehicles. On ALR sections, SVD adds to the system of inter-related features to help further reduce the risks associated with live lane stops.

We've upgraded 96% (92) of enforcement cameras on smart motorways to enable them to be used, and enforced by the police, to detect vehicles passing under a red X or entering a lane beyond a red X. By the end of September 2022, we'll have completed our commitment of upgrading 95 cameras. This will enable increased compliance with red X signals and help ensure the safety of drivers and their passengers in difficulty, or road workers and emergency services who need a safe space to work.

And we'll have introduced the automatic display of ‘report of obstruction’ messages on electronic overhead signs, which are triggered by SVD alerts, across 13 motorway sections. This message warns approaching drivers of a stopped vehicle up ahead.

We're committed to playing our part in taking forward all the recommendations. These include delivering a £390 million programme to install additional emergency areas and pausing the roll out of new all lane running smart motorways until five years of safety and economic data is available for schemes opened before 2020. The pause on new all-lane running motorways gives time to accumulate further data about their safety and will enable the Government to make informed decisions about enhancing capacity on the strategic road.

Our Smart motorways stocktake second year progress report also details our work in delivering these recommendations and shows how we'll continue to make enhancements to our smart motorway network.

Routes of smart motorways either completed or in construction

Read more about how we are delivering this stocktake action