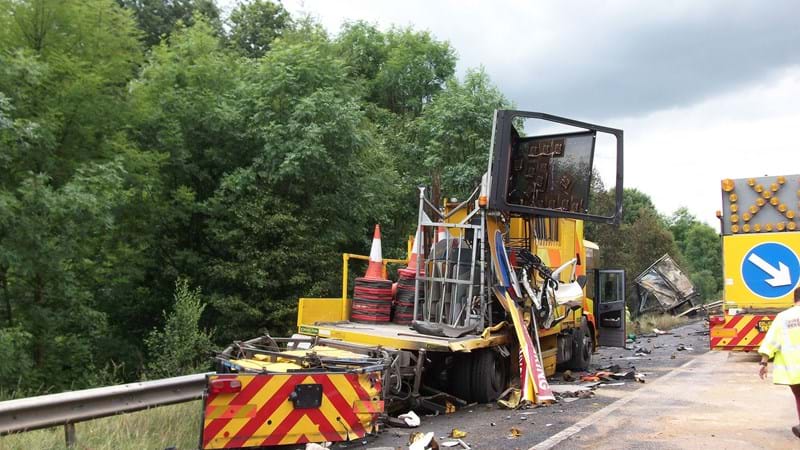 Highways England is urging its supply chain to stand together to improve safety as it was revealed that reported abuse cases have risen by 10% in 2020 compared to the same period last year, despite the lower traffic flows as a result of Covid-19 restrictions.

To mark Road Safety Week (16 - 22 November 2020) Highways England is urging all roadworkers to ensure they report any and all incidents of both incursions (vehicles entering roadworks) and abuse. This data is vital in order to inform traffic management through roadworks and to ensure any behavioural hotspots are targeted.

A selection of CCTV footage shows the range of ways that roadworkers are at risk from road users.

One clip shows a driver ignoring a road closure only to find that the road was closed to allow a crane to dismantle a bridge.

Other examples show how a lack of concentration can lead to drivers veering into the cones or even following roadworks vehicles into the roadworks.

How roadworkers are at risk from road users

"I’m proud of the way the Highways sector has come together to raise awareness of the issue. We urge members of supply chain to report all incidents of incursions and abuse. Together we can make a difference."

“Our roads keep the country moving, keep families connected and businesses in business, so our roadworkers are vital to everyone’s wellbeing, and their wellbeing is vital to us.

"175 reported incursions a month is far too many and it’s an issue on all types of roads, for our whole industry. I’m proud of the way the Highways sector has come together to raise awareness of the issue. We urge members of supply chain to report all incidents of incursions and abuse. Together we can make a difference.”

Highways England has recently lead a cross-industry project to raise awareness of road worker safety. Collaborating with 18 supply chain companies across the highways industry, such as Amey, Balfour Beatty and Skanska, Highways England has spear-headed the creation and production of a short video aimed at the public to educate them that driving into roadworks puts construction and maintenance workers at risk.

Showing the young daughter of a road worker who aspires to be just like her dad, the emotive video drives home the message that the public should abide by roadwork markings. It shows how dangerous it is when an incursion happens and highlights the people working behind the road cones, emphasising that they have as much right to get home safe and well as everyone else.

“In 2019, in Amey alone we recorded 753 actual vehicle incursions into our road closures. Worse still, we have an actual collision with a traffic management vehicle every 4 or so months. Each one of these results in injuries to our people and it is generally the case that the physical injuries heal far quicker than the mental health ones.

"I would not ask my kids to drive an Impact Protection Vehicle so I do struggle asking my colleagues to. Hence this unprecedented collaboration by the Highways sector in raising awareness is so critical in helping to eliminate the risk to the people that maintain our road network to keep the country connected. A few moments lapse of concentration could be life changing.”

Highways England is urging all roadworkers to report any incidents of incursion or abuse using their companies existing methods for near miss reporting.