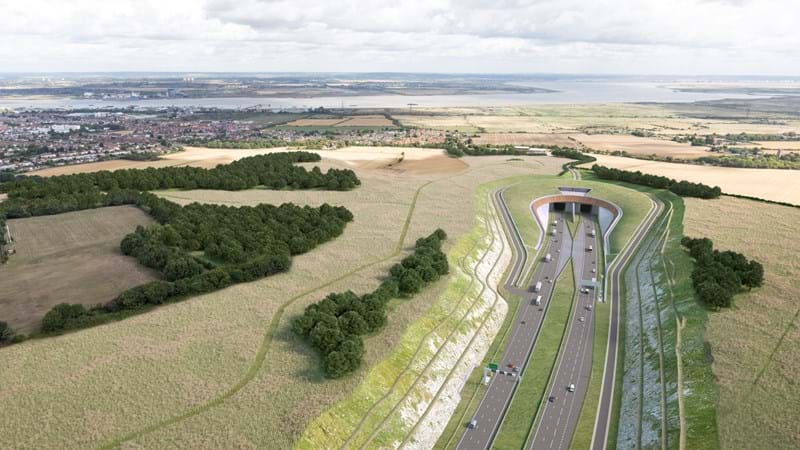 National Highways has today announced that Turner & Townsend Limited has been awarded the £23.3 million Commercial Partner contract on the proposed Lower Thames Crossing scheme, the most ambitious roads project for a generation.

The award of the Commercial Partner marks the completion of the Lower Thames Crossing integrated client team, comprised of National Highways, a Technical Partner, and an Integration Partner. Together with the main works contractors they will deliver the single largest roads project in a generation that includes the longest road tunnels in the UK, 14.3 miles of new road, seven green bridges to connect communities and wildlife, as well as new public parks and 46km of new and improved footpaths and cycle routes.

“Our roads connect us – we rely on them, and they are a critical part of our economic recovery and low-carbon future. The Lower Thames Crossing is the most ambitious road project this country has seen since the M25 was completed 35 years ago, and will improve journeys, create new jobs and business opportunities, as well as bring new green spaces for the local community and wildlife.”

“National Highways has a track record of successfully delivering major projects, and is bringing in partners from across the wider industry to not only help us deliver this project, but lay the foundation for how roads built in the future. A key part of this is how we bring  maximum benefit to as many people as possible whilst offering value for money, and the experience of Turner & Townsend can help us achieve that.”

“The Lower Thames Crossing represents a vital part of the UK’s future road network and will have a transformative impact on connectivity across the south-east. Through a collaborative delivery model, it has the opportunity to be an exemplar in driving programme performance and changing the industry’s approach to net zero. This fully aligns with our own strategy and will leave a strong legacy and positive outcome for its stakeholders.”

For almost 60 years the Dartford Crossing has stood as the only crossing between Kent and Essex, a critical link carrying vital food, goods and services between the manufacturing centres, ports, and distribution hubs of the South East, Midlands and North of England. It is designed for 135,000 vehicles a day, but it now often sees 180,000 a day use it, leading to long delays which businesses across the country say act as a barrier to trade and jobs.

The Lower Thames Crossing will improve journeys by almost doubling road capacity across the River Thames east of London. If given the green light this reliable new route will help to unlock a wealth of long-term economic benefits, as well as play an important role in the country’s economic recovery by supporting over 22,000 jobs during construction, including hundreds of opportunities for apprentices, graduates, and local businesses.

National Highways recently announced the shortlisted bidders for its three main work contracts: Roads North of the Thames and Kent Roads worth a combined £1.9 billion, and the £2.3 billion Tunnels and Approaches contract. The £162.5 million Integration Partner contract was awarded earlier in the year.