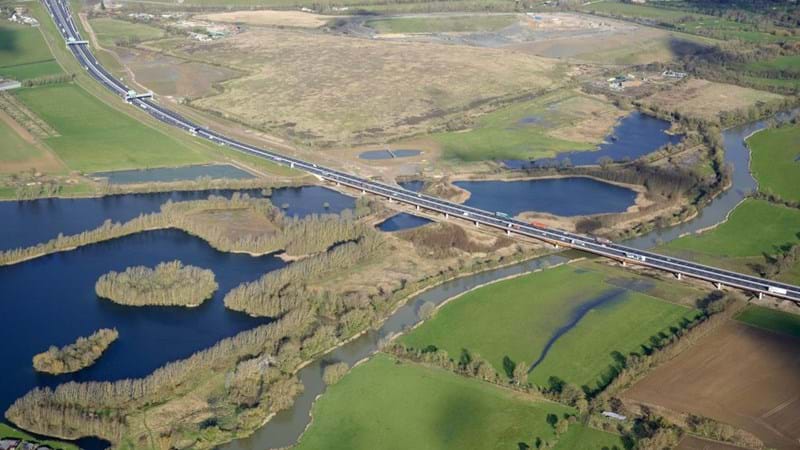 Despite traffic more than halving during lockdown, new figures show how the £1.5 billion upgrade of the A14 between Cambridge and Huntingdon is playing a crucial role in supporting the country’s journey towards economic recovery.

The improved 21-mile section is a vital link in the A14 which connects the East coast and the Midlands.

It opened some eight months early on Tuesday 5 May 2020, just before the initial easing of lockdown, so it has been able to meet the demand for added capacity at a crucial time.

The new road, which has been Highways England’s flagship project and the biggest investment in a roads project in a generation, is set to bring nearly £2.5 billion of benefits to the UK economy.

Businesses are also set to get a boost from the project, saving on average £70 million every year, as it is shaving up to 20 minutes off journeys and strengthening links between the Midlands and the East of England – vastly improving access to and from the UK’s largest container port at Felixstowe and making it more efficient to ship goods nationwide.

“The new A14 is a key addition to our national road network. Now it is open for traffic the country is better connected and this has a positive impact on national and local growth. The project is also leaving a positive legacy for local communities and the environment for years to come.

“Opening eight months early, and on budget, shows what the Highways England and the UK construction industry can achieve with efficient working and innovative thinking. I would like to thank everyone across Highways England and our supply chain for their involvement in this project, as well as road users, residents and stakeholders for their patience and support during the work.”

With around 85,000 drivers using the section every day before work started, including many more lorries than a typical A-road, the A14 suffered from heavy congestion on a regular basis. However, traffic numbers fell by up to 65 per cent during lockdown, including a daily low of just 7,596 in late March.

As lockdown eased, traffic numbers started to pick up again, with just under half the amount of traffic in the scheme’s opening week in May rising by nearly 90% to just over 71,000 journeys per day in early July.

Natalie Chapman, Head of East of England, South of England, and Urban Policy at the Freight Transport Association, said:

“FTA and its members are thrilled to see the upgraded A14 Cambridge to Huntingdon route is now open. This stretch represents an important strategic link for freight transport, connecting the ports in East Anglia with the Midlands and the rest of England; logistics businesses will benefit hugely from faster and easier journeys.

“The economy relies on efficient and reliable road networks to keep goods moving across the UK, but for too long, poor road connectivity in the heart of England has impacted businesses and slowed economic growth; this will all change with the opening of the new A14 Cambridge to Huntingdon stretch.”

“The business community is really delighted at the early opening of the A14 and, in particular, the very positive and timely way the scheme has been developed. Whilst there has been some short-term challenges which can be expected in a construction scheme of this magnitude, the significant medium and long term benefits will we know far outweigh the short term issues.

“The timing of completion as we begin to recover post-COVID19 is of significant importance as businesses try to find new ways to operate and get staff and goods into work safely. I know from personal experience how businesses as well as individuals are already benefiting from the shorter and more reliable journey times. A welcome tonic at the current time.”

“The whole A14 project is welcome news for residents and communities along the A14. It will not only benefit drivers with quicker and safer journeys but will ease the congestion experienced by many local communities and is great news for those drivers who have patiently waited in traffic while the new roads have been built.

“The A14 upgrade was vital to boost the local economy, improve connectivity and support growth in the area. I would like to thank Highways England and their contractors for their hard work and thank local residents and businesses for their patience during this project.”

The project was due to open in December this year, but efficient and innovative working by the team saw the last of the 24/7 roadworks removed in May, with the 12-mile long new bypass opened a year ahead of schedule in December 2019.

Essential work on the upgrade continued throughout the COVID-19 outbreak, and a number of measures were also put in place to ensure work was completed safely and in line with Public Health England’s advice.

Work on the final phase of the A14 upgrade, the demolition of the old viaduct and opening of new link roads in Huntingdon, is progressing well and due to be completed by 2022.