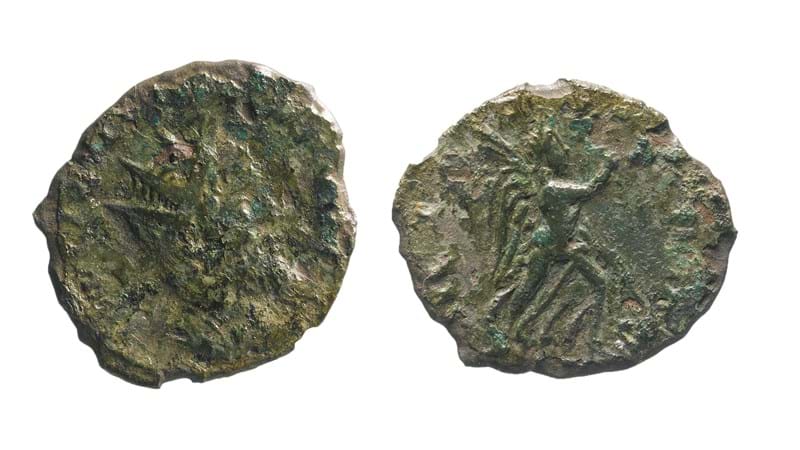 An incredibly rare coin featuring a Roman emperor who reigned for only two months is the latest remarkable discovery made on Britain’s biggest road upgrade.

The ‘radiate’ coin, which depicts the Roman emperor Ulpius Cornelius Laelianus wearing a radiate crown, is only the second of its kind to be discovered on an archaeological dig in England.

It was uncovered by the team of archaeologists working on Highways England’s £1.5billion upgrade of the A14 between Cambridge and Huntingdon.

The find is significant because the usurper Laelianus ruled a breakaway empire from Rome for a short spell in the Third Century, with evidence of his reign very rare. This coin did likely not arrive in Britain from the continent until after the ill-fated emperor’s demise.

Dr Steve Sherlock, archaeology lead for the A14 on behalf of Highways England, said: “Discoveries of this kind are incredibly rare. This is one of many coins that we’ve found on this exciting project, but to find one, where there are only two known from excavations in this country that portray this particular emperor, really is quite significant. I look forward to seeing how the analysis of this find along with numerous other Roman remains that we have found on this project help us better understand our past.”

The coin was discovered in the ditch of a small Roman farmstead unearthed on the project and the head on it has been identified by a leading coin expert as the ill-fated Emperor Laelianus who usurped the Gallic Empire in 269AD.

Highways England is working with experts from MOLA Headland Infrastructure on the A14.

Julian Bowsher, numismatist at MOLA Headland Infrastructure, said: “Roman emperors were very keen to mint coins. Laelianus reigned for just two months which is barely enough time to do so. However, coins were struck in Mainz, Germania. The fact that one of these coins ever reached the shores of Britain, demonstrates remarkable efficiency, and there’s every chance that Laelianus had been killed by the time this coin arrived in Cambridgeshire.”

An even older coin was found on the project recently, dating back in 57 BC, meaning it was likely minted to help fund the resistance to Julius Caesar. The Gallic War Uniface coin was minted by the Ambiani tribe, who lived around what is now Amiens in the Somme area of modern day France, and exported their currency across the Channel to the Celtic cousins to help resist the Romans.

The approach to archaeology on the A14 underlines Highways England’s approach to protecting the country’s cultural heritage. Elsewhere, on the A1, work on another road upgrade recently uncovered new evidence pointing to Roman occupation in northern England earlier than previously thought.

Highways England is required by law to agree plans for how a scheme will deal with the effects it will have on its immediate environment, including local communities, wildlife and plants, and also any archaeological finds that may be found ahead of starting work on any new road or major upgrade.

The pioneering work of the project has now seen the A14 archaeology win the “Rescue Project of the Year” accolade in the 2019 Current Archaeology Awards.

In the spring of AD 269, Laelianus was most likely the Governor of Upper Germany. From Mainz (ancient Mogontiacum), Laelianus, who was a superb military commander, defeated an invasion by Germanic tribes from over the Rhine. After this success, he went on to launch a revolt against the emperor of the break-away Gallic Empire, Postumus, and took over a large part of what is now Germany and France. However, his ‘reign’ cannot have lasted more than a couple of months. Both Laelianus and Postumus were killed in the siege of Mainz – Laelianus by soldiers loyal to Postumus. The new emperor Victorinus, restored peace.

Coins of Laelianus have his bust (head and shoulders) on one side and Victory on the other. The only other coin of his to be discovered on an archaeological excavation in England was found in Greenwich Park in 2001 – most are found in coin hoards not alone, as this one was.

The coin is important not just because of its scarcity, but also because it is physical evidence of the coin being circulated in Britain – also part of the Gallic empire – during Laelianus’ short and turbulent reign.