As part of our £380m A1 Leeming to Barton upgrade (2013-2017) we worked closely with AECOM and the Northern Archaeological Associates (NAA) of Barnard Castle to carry out archaeological excavations in advance of construction. 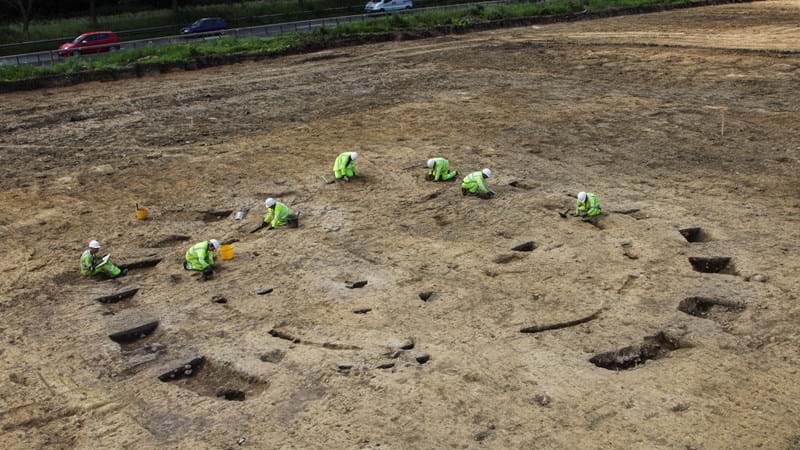 The site at Scotch Corner represents an extremely large settlement, the scale of which had not been realised until our scheme. The site, which is of national significance, was associated with the Iron Age oppidum (or tribal centre) at Stanwick a short distance to the north west.

Work in the northern section of the site identified an industrial area where huge quantities of coin pellet mould were discovered. The pellets produced in the moulds would have been used to produce coinage, and this represents the first evidence for this kind of activity north of the Humber.

The extraordinary objects provided archaeologists with an insight of the interaction between the Romans and the local population.

Here we detail some of the major finds at Scotch Corner and how the remains identified show it was the site of a much older junction.

Upkeep of the Roman network

One of the finds includes evidence for the upkeep of the Roman road network, with the site revealing potholes and the 200-year-old attempts to fix them. Not with today’s asphalt or concrete but with local limestone. Evidence of investment in the road infrastructure during Roman times links well with the recent investment in infrastructure which resulted in the discovery of the site. It also reveals the role of precious metalworking at a time of relative peace and unprecedented prosperity during the early 1st century, as native elites negotiated political harmony with the invader and received gifts of exotic objects and foods.

Amongst some of the finds was a glass head which apparently represents Bacchus, the Roman god of wine and protector from death and may originally have formed a glass wine jug handle. It is thought it was removed and reworked into an amulet which was probably carried as a personal possession. While it is tempted to associate this with drinking, it is likely to have alternative meanings, with Bacchus also admired as a saviour god.

Here you can see it as a plaster cast impression 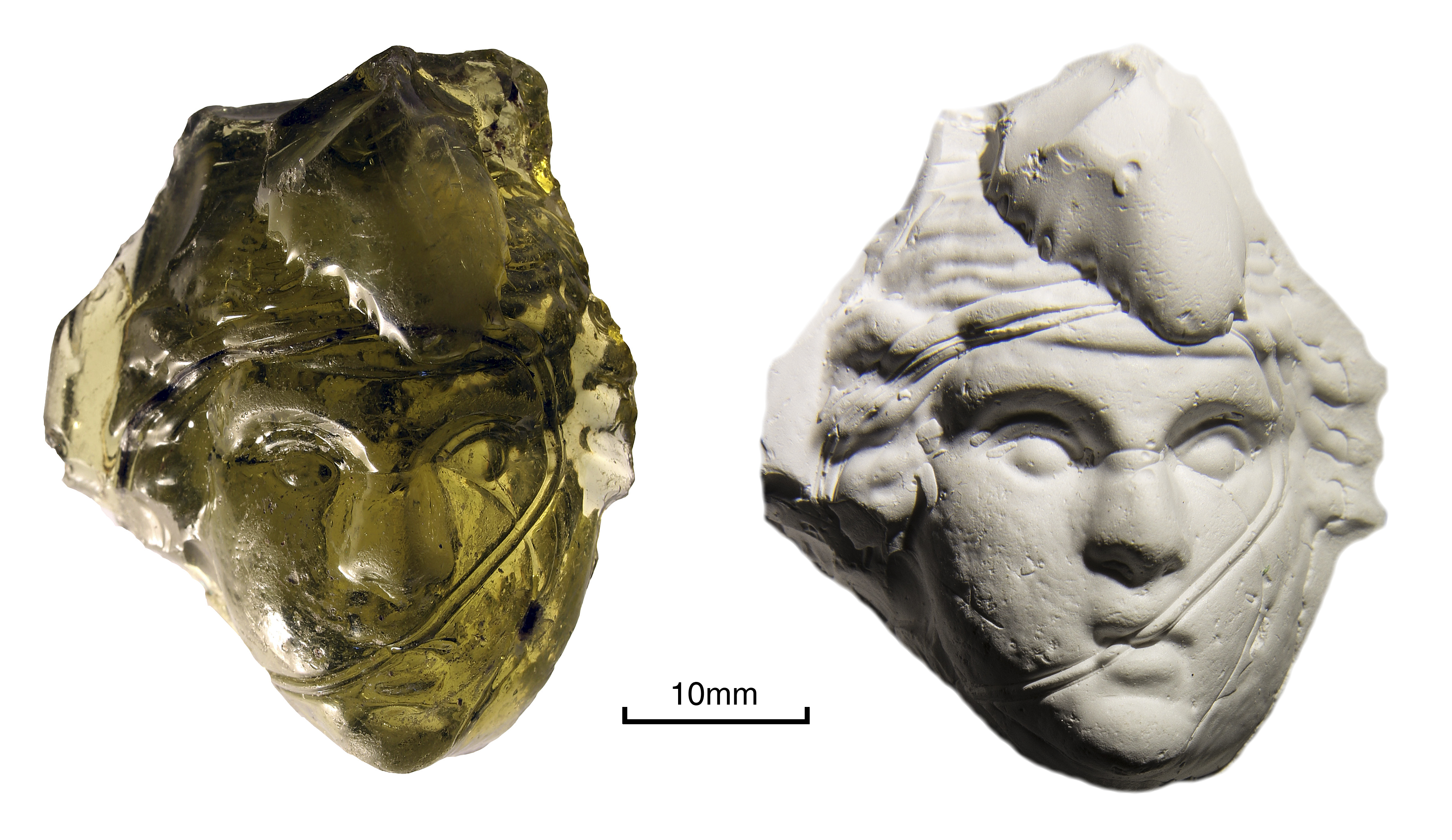 The following two items, the amber statuette fragment and miniature sword, are rare and unusual objects from early Flavian contexts and are indicative of a Romanised society. There is evidence for a high-status community of both sexes that had time for leisure and personal maintenance and possessed the equipment for formal social occasions such as dining.

The statuette is a fragment from the torso of a male figure. The figure is an actor, the most popular subject chosen for amber statuettes, but the lack of a head and any attributes held in the hand makes it impossible to identify what stock figure was intended. Although the amber almost certainly comes from the Baltic, it was taken via Central Europe to Italy for carving and then sold on from there.

This is a rare example from Britain of a miniature iron-bladed sword in a scabbard, and the most complete example so far. The hilt consists of a ribbed bone grip made in one piece and a separated guard with groove decoration. The copper-alloy scabbard has U-shaped guttering on the sides and a separate chape pierced by a central hole for attachment.

While the surviving hilt is Roman in style, the scabbard shows mixed British and Roman influence. The terminal on the end of the scabbard is closer to Roman in designs than native British, and copper-alloy guttering was common on Roman scabbards for Mainz-type swords up until the Flavian period and occasionally on the later Pompeii-type scabbards.

The distinctive southern-type loop on the miniature sword suggests that the sword was most likely a personal item belonging to someone who had bought or made it when living in the south. It represents a hybrid British/Roman weapon, reflecting the short-lived but distinct fashion for Roman soldiers to use hybrid swords during the conquest period in Britain up until the Flavian period.

The miniature sword, although not precisely an item of military equipment, does reflect how the army was incorporating influences from their surroundings at the time of the conquest and adopting native elements during a time of change. If it was designed to be used as a knife, it would surely have appealed to someone with a military background.

The work at Scotch Corner has been heralded by Historic England as one of the top ten archaeological discoveries of the decade and the detail has now been published in the second of three major monographs – Contact, Concord and Conquest: Britons and Romans at Scotch Corner.

As well as being a key Iron Age settlement, the site also represents the first clear evidence for Roman activity in the north of England, pushing back the first contact between the local tribes and the Romans by at least 10 years. This evidence of first contact is key to the study of Romans in the British Isles, and specifically the north of England.

The early Roman activity, or contact period, stands out because of the large collection of high value finds including the finest pottery and glass, as well as carved amber and stunning jewellery. The fine living and dining assemblage symbolising concord, exotic continental imports, evidence of new food and feasting, of literate people, wooing of the tribes.

The excavations revealed extensive evidence for Scotch Corner being a key road junction from at least Roman times. Although the A66 and A1 appear to have much earlier origins as routeways, the excavations revealed a huge investment by the Romans to establish the area as a key junction on the network of Roman roads. Such an undertaking symbolises the conquest of the north, as it enabled both troops and supplies to be moved about with relative ease.

And the importance of the Scotch Corner junction remains today. The preferred route has just been announced for the billion-pound project to dual the remaining single carriageway sections of the A66 between Scotch Corner and Penrith.

This route is hugely important for freight traffic across the United Kingdom and as the main link to the Lake District and North Pennines to the East of England. Find out more about our plans for the route.

The publication will enable local residents to learn about the regions history whilst building a legacy for future generations.