Upgrading the A30 single carriageway between Chiverton Cross and Carland Cross roundabouts. As part of our Strategic Road Network, the A30 is a road of strategic importance, which is why an £8m contribution from the European Regional Development Fund has been committed, as well as being identified as part of the Government’s Roads Investment Strategy.

Visit our A30 Chiverton to Carland Cross feedback tool to have your say. The tool includes an interactive map, so you can pinpoint any comments you may have about our work, or just give us general feedback.

ECHO is a one-way feedback tool, so if you'd like a response to your feedback, you can email the project team at A30ChivertontoCarlandCross@highwaysengland.co.uk 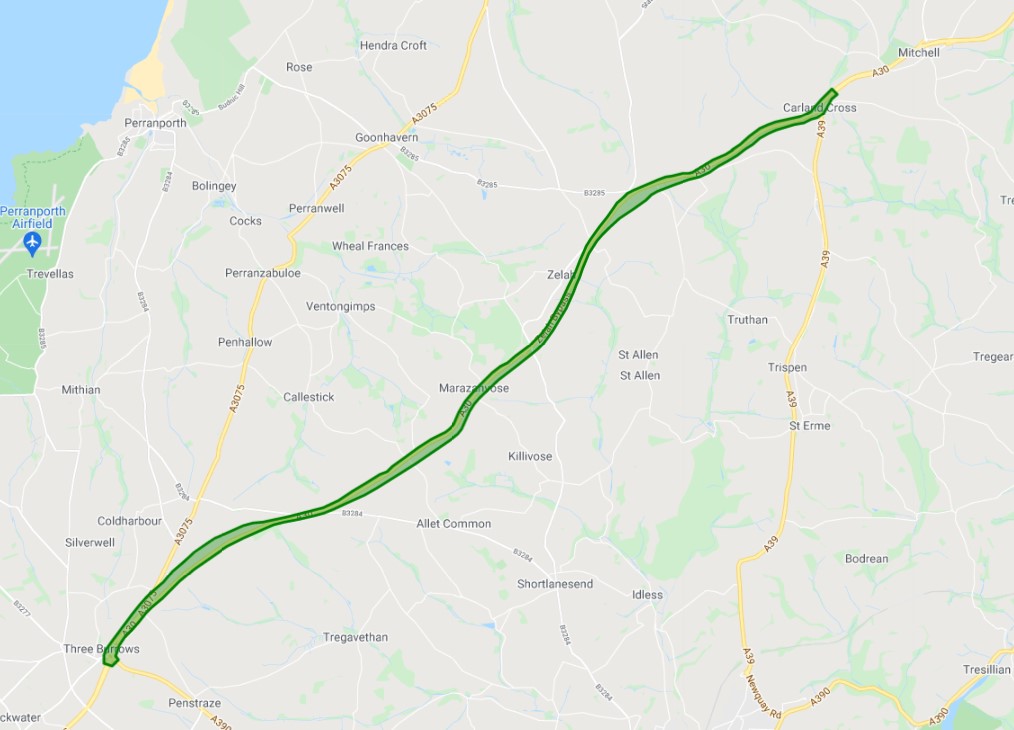 The Government’s Road Investment Strategy includes a commitment to improve the A30 between Chiverton Cross and Carland Cross roundabouts to dual carriageway standard. Funding for this scheme includes a contribution from the European Regional Development Fund of £8 million towards its development costs, with a further £12 million allocated for the construction phase.

You can find more information about the proposal on our consultation page.

Improving the A30 between Chiverton and Carland Cross is incredibly important for Cornwall’s future. It's the only remaining stretch of single carriageway on the A30 between Camborne and the M5 at Exeter; journeys on this part of the road are regularly delayed, congestion often brings traffic to a standstill, and as a result the Cornish economy is being held back.

For local people, particularly during the summer season, the simple act of getting to a neighbouring village can lead to unacceptably long and unreliable journeys, while opportunistic rat runners pose increased risk of accidents in their villages.

This summer we carried out research to gather insight on how it feels to travel to, from and around Cornwall during peak season. Some of our visitors' experiences are captured in this video.

You can view our fast facts document to find out more.

The objectives of the scheme are to:

Our schools project in the area is designed to help children and young people understand science, technology, engineering, the arts and maths (STEAM) in the context of the A30 Chiverton to Carland Cross road scheme.

Through a series of interactive sessions relating to the work of our team (which comprises engineers, designers, environmental and traffic experts, scientists and communications specialists) we hope to bring school subjects to life for students, showing how the things they learn in school apply in the real world.

If you're a parent or teacher interested in finding out more about the STEAM project, please email the project team: A30ChivertontoCarlandCross@highwaysengland.co.uk

We've been looking at a number of projects with an environmental and cycling safety focus that we’re planning to deliver over the coming months. Known as designated funds projects, these mini-schemes will be carried out completely separately to the A30 Chiverton to Carland Cross improvement scheme.

You can find out more about these projects, including how they're funded, approved and delivered by visiting our Designated Funds page.

The DCO process was established by the Planning Act 2008 and is used for certain large and complex schemes (including highway improvements) that have been designated as a Nationally Significant Infrastructure Project (NSIP) by the Government.

The benefits of the DCO process include extensive pre-application consultation, detailed analysis, including a full Environmental Impact Assessment, and examination by an independent inspector before the final decision is made.

The Secretary of State for Transport granted development consent for the A30 Chiverton to Carland Cross Development Consent Order (DCO) on 06 February 2020. Links to key DCO documentation can be found below:

The made DCO is Statutory Instrument 2020 No. 121 and is available to view at legislation.gov.uk.

This Requirements Register is a live document and will be updated as the process to discharge the requirements progresses.

The latest version will always be published below:

This register will be maintained for three years following completion of the project. The register sets out:

A303 Stonehenge (Amesbury to Berwick Down)