The Institution of Civil Engineers has shortlisted two bridge schemes in the South West for engineering awards. 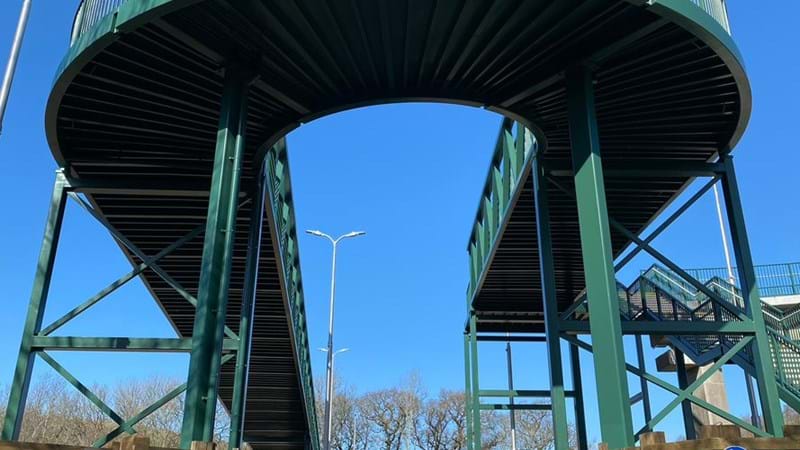 Although being very different from one another, both bridges represented challenges in engineering and this is reflected in the category they have been selected for:

Both are also eligible for the People’s Choice award.

A38 Mowhay footbridge
This footbridge links an urban area in the north of the city with a green area to the south. The original bridge was too narrow to safely accommodate cyclists and walkers. A whole new footbridge was considered, but instead, a more carbon-friendly option was chosen. This involved making use of the existing structure and widening the deck with specially designed concrete slabs. The gradient on new widened steps and ramps was also reduced to make access easier.
The scheme was delivered by South West Highways Ltd and cost £2.89 million to deliver.

M5 J11 Golden Valley gyratory
This gyratory is a major junction for Gloucester and Cheltenham, and two of the supporting bridges which make up the raised roundabout were in need of major refurbishment. The position over the M5 made this a challenging site to work on. Hydrodemolition was used to remove defective concrete so the bridge decks had to be completely encapsulated by scaffolding to prevent debris and water from escaping onto the M5 below. The water used in this process had to be collected and cleaned before being released back into the drainage system.
The scheme was delivered by MJ Church and cost £11 million to deliver.

To find out more and vote, visit https://www.ice.org.uk/about-us/what-we-do/ice-near-you/uk/ice-south-west/awards/civil-engineering-awards/
Voting closes on 29 July and the ICE awards ceremony will take place in Bristol on 15 September.