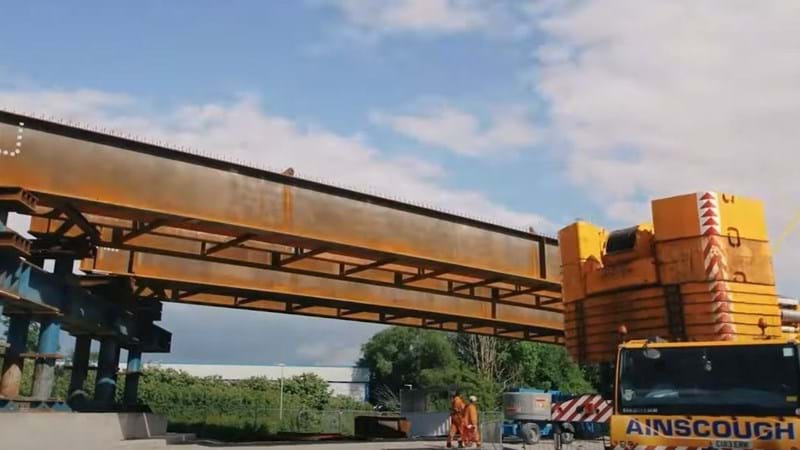 Timelapse footage taken during the construction of the replacement Expressway Bridge along the A533 shows the moment beams weighing the equivalent of 45 elephants were delivered and assembled.

The beams, measuring 12.5 metres wide, took 12 weeks to be built from cutting the plate from the rolling mill, fabrication, grit blasting and trial fitting before being transported to the project site.

The A533 Expressway Bridge is a concrete bridge that carries the Chester Road combined with the A533 over the M56 motorway.

It’s located between junctions 11 and 12 and is a vital local link, providing access across the M56 to Runcorn from Preston Brook and Northwich.

We, with the help of AmeySRM, are replacing the existing structure with a new 67m concrete bridge, consisting of a single two-lane carriageway and a combined footpath and cycleway.

The replacement of this bridge will ensure an increased life span of over 120 years for road users, maintaining safety in the long term.

A substantial part of the project will be built off site to minimise disruption and we’ll keep the existing bridge open while we construct the new bridge.

Sam Whitfield, our scheme Project Manager, said: “The delivery of the bridge beams marks a key milestone for the A533 Bridge Replacement project.

“They are an integral part of this project, and will provide our customers with a replacement structure which is designed to last for more than 120 years.

“Construction of the new bridge will continue adjacent to the M56, minimising disruption to drivers and will be open for traffic next summer.”

Chris Buckley, AmeySRM Project Manager, said: “A substantial part of the project will be built off site to minimise disruption and we’ll keep the existing bridge open while we construct the new bridge.”

On completion, traffic will be transferred to the new structure to continue the flow of traffic and allow for the demolition of the existing bridge structure. The new bridge is expected to be open to traffic in summer 2023.