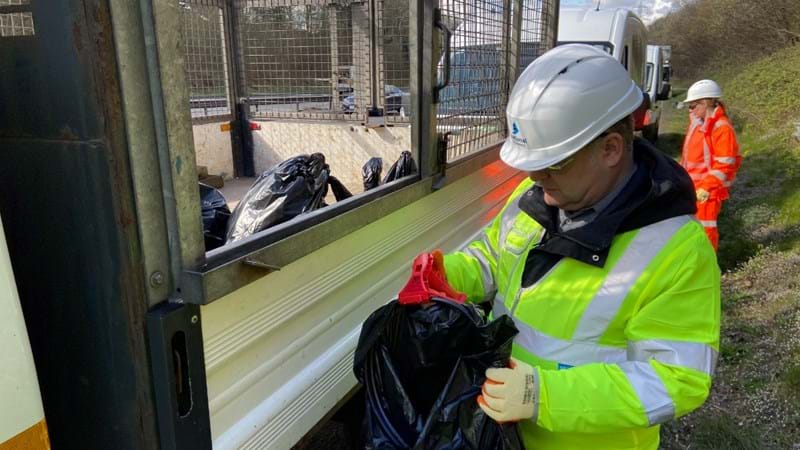 Our support for a national litter-picking campaign gathered pace as piles of rubbish were removed from the M56 in Cheshire.

We have joined Keep Britain Tidy’s ‘Big Bag Challenge’ and pledged to pick at least 8,000 bags of litter for this year’s Great British Spring Clean.

A targeted litter pick on Friday 1 April saw maintenance teams clear rubbish from the M56 at junction 12 near Runcorn. We received a helping hand from Keep Britain Tidy campaigners and Mike Amesbury, MP for Weaver Vale.

Paul Elliott, our maintenance service manager for the North West, said: “Millions of people travel on National Highways roads like the M56 every day and despite efforts like this to clear it, our network quickly becomes littered from vehicles and unsecure loads.

“Litter is a serious social problem with devastating consequences for wildlife and the environment. Clearing litter from the side of roads also exposes maintenance crews to significant risk.

“Our priority is to keep our roads safe and well maintained, and litter is a huge issue that we are tackling daily. We urge people to save litter for the bin, rather than throwing it on the side of the road.”

Keep Britain Tidy estimates it costs around £1 billion every year to clean up litter. Litter also poses a serious safety risk on roads as verges and barriers form corridors where litter and debris build up at an alarming rate, creating a hazardous environment for road users, wildlife and the maintenance crews who clean it up.

While the Great British Spring Clean runs for a matter of weeks, we pick litter throughout the year and carry out regular check to make sure our strategic road network is in good condition.

Mike Amesbury, MP for Weaver Vale, said: “It was good to be out with the team from National Highways, but it’s a shame they have to be there because of an irresponsible minority of drivers. Not only is the litter unsightly but it’s deadly to mammals and wildlife.

“Workers are having to pick up 60 bags of rubbish every single day. And it’s quite hairy having to do that exercise on motorway verges and slip roads, as well as costing money to the taxpayer that would be better spent elsewhere.

“The key ask is for people to do the responsible thing and take their rubbish home for recycling or discard it in a litter bin at a service station.” 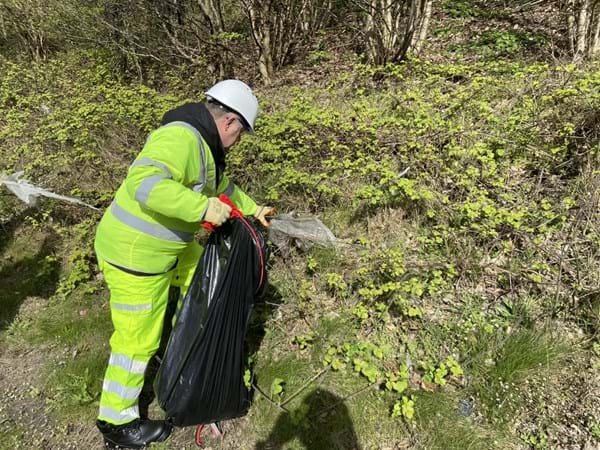 Lucy Fell, account director for Amey, said: “We deliver a range of maintenance work on behalf of National Highways to help keep people moving. It’s shocking to see the amount of litter on the sides of our roads.

“To litter pick the side verges, we need to install lane closures to ensure safety for our operatives and the travelling public. By taking part in the Great British Spring Clean, we’re encouraging everyone to save their rubbish for their bin, reducing the need for our operatives to litter pick and time better spent improving the road network.”

We want to hear from you if you spot something wrong on the roads. This could be anything from a broken sign or barrier, to litter, overgrown vegetation or potholes.