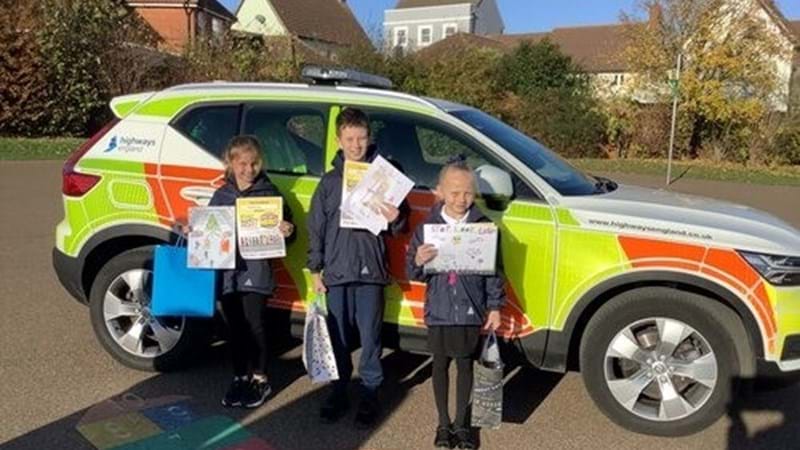 School children at Chancellor Park Primary School in Chelmsford have put their artistic skills to the test by taking part in a road safety poster competition as a part of a National Highways visit during Road Safety Week.

Road Safety Week is the UK’s biggest road safety event. Every year, thousands of schools, organisations and communities get involved to shout out for the right to make safe and healthy journeys every day.

This year to support Road Safety Week, we teamed up with infrastructure and engineering specialists Colas and Volker Fitzpatrick - who are currently delivering concrete road surface improvements on the nearby A12 - to launch a road safety poster competition.

This year's theme is road safety heroes, celebrating the heroic work of road safety professionals, and explaining how everyone can play a part in making journeys safer. More than 70 posters were entered into the competition, with National Highways and Colas Ltd visiting Chancellor Park Primary School last week to award the winners their prizes and offer pupils a chance to see a traffic officer vehicle up close.

The winners of the road safety poster competition were: 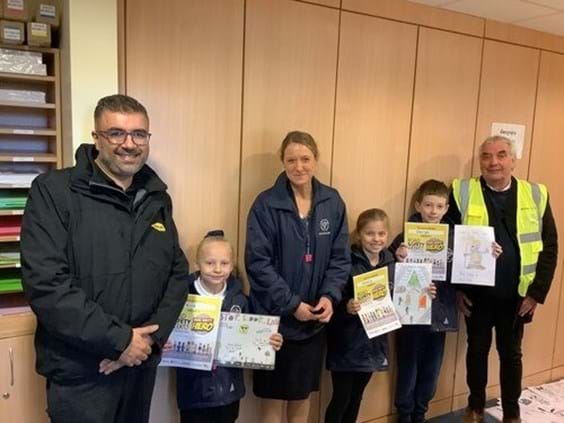 (The winners were selected from a pool of 72 entries.)

Matt Cooper, one of our traffic inspectors, said:

“We were delighted with the response we had from the children who were interested in our road safety work; they came up with some excellent, creative posters. The highways inspector vehicle also proved to be a real hit with the pupils!

“The competition was designed to help promote road safety messaging. Getting local school children involved enables the message to be taken home to families and friends and helps encourage a generation of future drivers to think ‘safety first’.”

“A big thank you to National Highways, Colas and Volker Fitzpatrick for inviting our school to get involved with this great community project. The children thoroughly enjoyed the creative task of designing some posters which promoted the importance of road safety, and the winners were delighted with their generous gifts they received.

“Our younger pupils had a visit from a National Highways inspector and vehicle which resulted in some great questioning and a greater understanding of the role they play in keeping our roads safe.” 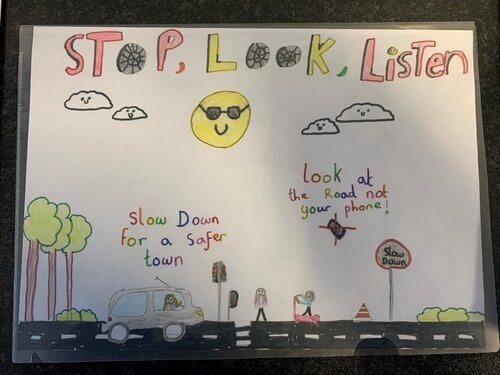 Colas will also be returning to the school soon via Zoom to present a Road Safety assembly.

National Highways supported the competition which was launched by Colas and Volker Fitzpatrick who are currently delivering concrete road surface improvements on the A12 between junction 15 (Webb Farm Interchange) to junction 19 (Boreham Interchange).

Work on the upgrades has progressed well and is expected to be completed by 10 December - ahead of the original schedule.

As a part of the Road Investment Strategy, we are spending £400m in the next three years to improve the quality of existing concrete roads across the country.

Concrete roads make up almost 400 miles (4%) of England’s motorway and major A-road network. Mostly found along the eastern side of the country, in the North East, Yorkshire, East Anglia and the South East, there are also some smaller stretches in other parts of England.

Find out more about our concrete roads programme