Fascinating Finds: archaeology on the A428

We are working with MOLA (Museum of London Archaeology) to excavate and record any archaeological features before we start construction. 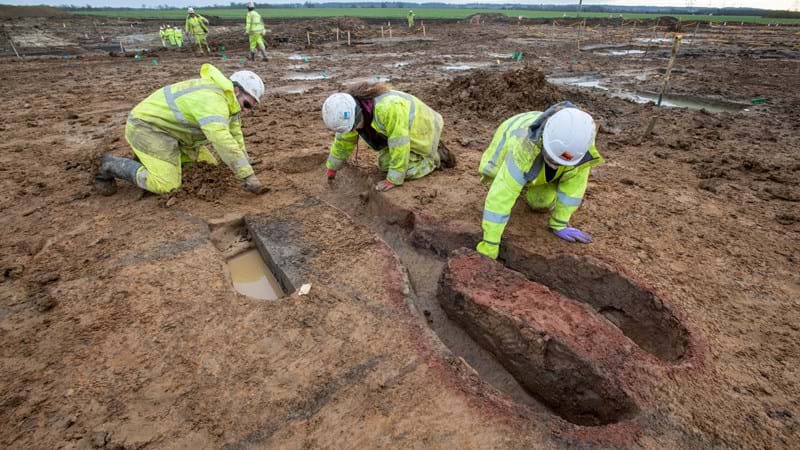 Why do we do archaeological work?

Archaeological investigations are an important part in preparing to build a road. Before we start to build, our archaeologists will carefully excavate and record what’s beneath the surface. We are carrying out advanced works around our proposed route, so you may see us in fields and land nearby.  This means local people, communities and enthusiasts discover more about the heritage of the region. By doing this work now, we can sensitively excavate any finds, help keep the overall construction programme as short as possible and reduce disruption for the local community.

Over the last year we’ve been working with the experts from MOLA who’ve been digging at a site known as Field 44, near the village of Tempsford in Central Bedfordshire. Here we have uncovered an ancient farm. We discovered that the farm was in use from the Middle Iron Age (c.300-100 BC) all the way through to the late Roman period (AD 201-400). This settlement has offered an incredible opportunity to look at how life in the region changed over a long period of time.

The very first trial trenches dug in 2020 produced a surprising number of finds, including imported goods such as fine tableware (called Samian) and amphorae (pottery containers with a pointed bottom, mainly used to transport liquids).

Well before the farm existed, people were already visiting this area. Although no evidence of where they lived has been found, they left behind signs of their activities. Flint arrow heads have been discovered dating back to the Neolithic (c. 4000-2200 BC) and Bronze Age (c. 2600-700 BC), suggesting that people were hunting wild animals in the surrounding landscape.

Other finds at the site include an incredibly well-preserved ladder, which was found in a well, where the water and mud preserved the wood for thousands of years. We could imagine that people would have used this to go up and down its steps to get to the water at the bottom of the well.

At the farm we also discovered a Roman oven, used to dry grains. Now archaeobotanists (archaeologists specialising in the study of past human-plant interactions) have identified charred spelt grains that were left to germinate (sprout shoots) before being dried within this structure.

As large quantities of grains are only allowed to germinate when the aim is to produce malt – the first step in the brewing process – this strongly suggests the people living at the settlement were involved in beer production.

Highways to the past podcasts

If you have ever wondered how we know where to dig or what’s it like working on an archaeological site, find out the answers on our podcast, 'Highways to the past'. Click here to listen to all episodes!

As part of the archaeological work around the proposed A428 Black Cat to Caxton Gibbet improvements, we developed an online StoryMap, with support from Tempsford Museum and St Neots Museum. This interactive tool reveals where various finds were discovered by mapping their locations onto site plans produced by the archaeology field teams.

You can find the StoryMap here.

Scroll through to explore Field 44 and learn more about local artefacts from Tempsford and St Neots museums, selected by community members to represent the wider heritage of the region.