Our archaeological investigations so far have included a range of detailed surveys of areas of land that will be disturbed by construction both inside and outside the World Heritage Site. 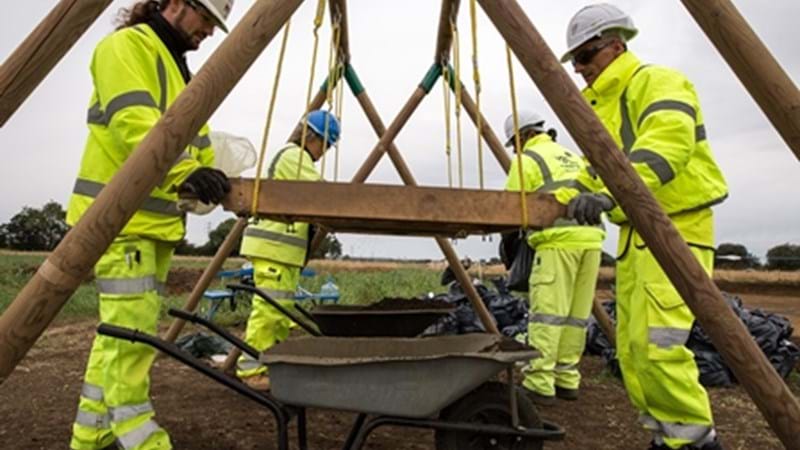 Almost two square miles of “geophysical” surveys along the entire length of the scheme and ground penetrating radar within the World Heritage Site allowed us to see beneath the soil before anything was dug.  We also looked for and collected items on the surface of ploughed areas.

These showed us where to explore deeper – eventually we hand dug and sieved almost 1800 small test pits and excavated over 500 larger trial trenches.

These initial investigations have given us a good idea of what we might expect to find when we start our main fieldwork later this year.

We’ve uncovered some interesting but not unexpected finds including flints, stone tools, pieces of pottery and several burials, uncovering evidence of human activity dating back over 7000 years.

Pieces of worked  - or knapped – flints and stones were found along the route of the scheme.  These are mostly waste products from the manufacture of tools, such as arrows and blades, made by humans living in the landscape between around 7000 to 3000 years ago. We also found some tools – but a relatively small number.  These finds reflect the patterns of human activity extending beyond the World Heritage Site, throughout Wiltshire and the UK.

A number of pottery pieces were uncovered, mostly dating from about 4000 BC to 700 BC, but also from the Roman and medieval periods, right up to the modern era. We also found pieces of pots known as Beakers, made by people living approximately 4500 years ago at the time when many of the barrows (burial mounds) in the landscape were built along with some of the bluestone circles at Stonehenge.

One notable find is a small object made of shale found in the grave of a female in her twenties or early thirties.  This could be a ceremonial cup purposefully damaged before it was laid in the grave, or may be a cap off the end of a staff or club.  The burial dates to the Beaker period, when new types of pottery and other objects appear in Britain.

Several other burials were found including tiny ear bones from an infant buried alongside a plain Beaker.

Just to the west of the World Heritage Site, we discovered a ‘C’-shaped enclosure dating to the late Bronze Age, which could have been an area for industrial working, due to the amount of burned flint contained in the soil around it.

All finds uncovered during our evaluation work are being stored safely and will eventually be passed to Salisbury Museum.

You can find the full evaluation reports in our Development Consent Order application on the Planning Inspectorate’s website.