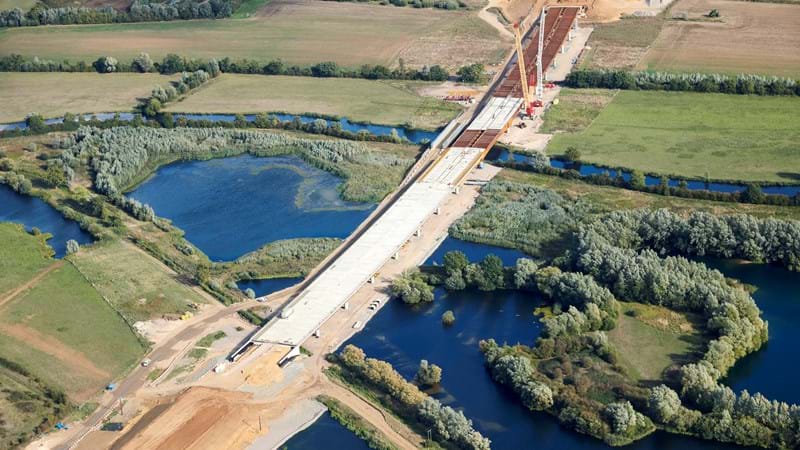 The £1.5bn A14 Cambridge to Huntingdon improvement scheme reaches its half way point this week.

Construction work to upgrade 21 miles of the A14 between Cambridge and Huntingdon started on Monday 28 November 2016 and is on target to be completed by December 2020.

Since work started, more than 8 million working hours have gone into the project, and eight million cubic metres of earthworks have been moved across the site – equivalent to more than three Great Pyramids of Giza. Nine new bridges will have opened to traffic by the end of the year and construction is well underway on 25 more. Along the way, the project team has started delivering extensive protection for the environment and uncovered astonishing archaeological finds which shine new light on thousands of years of history.

“Our amazing team has been working incredibly hard to deliver this upgraded A14, and most days we have up to 2,700 staff working across more than 20 miles to build the new roads and bridges that are needed, in addition to all of the environmental measures we are implementing. This is the biggest road building project currently taking place in the country and yet drivers will only see around a quarter of it from the existing road at present.

“Working on this epic project has been remarkable so far: from seeing the new road emerge as we moved earth into place for its foundations, to the wide array of bridges and structures being built, the fantastic discoveries of our archaeological team and the industry-leading work our environmental team is carrying out.

“We know drivers can be frustrated by roadworks, particularly when they’re in place for a long time, but we’re delighted to announce at this two-year anniversary that we’re on time and on budget, having completed more than 50 per cent of the work, to get this new road opened for drivers by the end of 2020.”

Highways England is upgrading a 21-mile stretch of the A14 between Cambridge and Huntingdon to three lanes in each direction including a brand new 17-mile bypass south of Huntingdon, with four lanes in each direction between Bar Hill and Girton. The project, which includes 34 main bridges and structures, will add capacity, boost the local and national economy and cut up to 20 minutes off drivers’ journeys.

Since work started in November 2016, 80 per cent of the 10 million cubic metres of material needed for the £1.5 billion project has been moved, with the spoil used for new earthworks and embankments. More than 8,000,000 construction hours have been worked, and the 750m long River Great Ouse Viaduct, with its 6,000 tonne steel structure, is 85 per cent complete.

The project team has worked hard to keep traffic flowing through the roadworks, leaving all lanes open to traffic during the day, with extra restrictions, when needed, in place overnight and at weekends. The free recovery service has also responded swiftly to every incident within the existing roadworks, recovering more than 700 broken down vehicles, with 95 per cent of these cleared within an hour, and 184 cleared within 30 minutes.

The team has won eight industry awards for innovative working, including ‘Best Construction Project to Work On’ and a RoSPA Gold Health and Safety Award. The project is also the first of its type to be recognised as by the Considerate Construction Scheme as an ‘Ultra’ site, for the way the project is delivered.

The project’s diverse workforce includes more than 100 apprentices and 63 graduates, in addition to 28 internships and two Groundwork outreach programmes.

Some 250 archaeologists have been involved in the scheme, investigating 33 sites across 360 hectares. Their remarkable discoveries include 40 pottery kilns, 342 burials, a Roman camp, an abandoned Medieval village, rare Roman coins from the third century, and a variety of Ice Age animals, including a woolly mammoth from 130,000 years ago.

Some 866,000 plants from 50 different species will be replanted alongside the new A14, with trees in keeping with those found locally including oak, elm, hawthorn, blackthorn, elder and field maple. Several rare plant species have also been moved so that they can be replanted. In all, twice as many trees will be replanted as those which have had to be felled for the construction of the new road and cleared vegetation has been used within the local community for energy production. All the electricity used in the project has come from renewable energy.

The team has also been working hard to support local charities and good causes, with 30 local projects receiving £280,000 to benefit around 2,000 people. as part of the A14 Community Fund. Around £60,000 has been raised for local charities through various initiatives too.

In partnership with Cambridgeshire County Council, a £3.5 million programme of works has started to build new pedestrian, cyclist and horse rider routes in addition to the 18 miles which are provided as part of the scheme. Funding has also been secured to support four local flood prevention projects. Communities have engaged with the project thanks to the team’s mobile visitor exhibition centre attending 70 events, reaching around 5,000 people.

In recent weeks, a new bridge over the A14 at Swavesey has opened to traffic, and an old bridge demolished. Two massive new bridges at Bar Hill were also moved into place during a weekend operation in September, having been pre-fabricated next to the A14. Looking ahead, the project team expects to open a new local access road between Cambridge and Dry Drayton this winter, and the new A1 between Brampton and Buckden is expected to open early in 2019.

The fully upgraded A14 is due to be opened to traffic by December 2020.