On the first day of Christmas, the A14 gave to me … 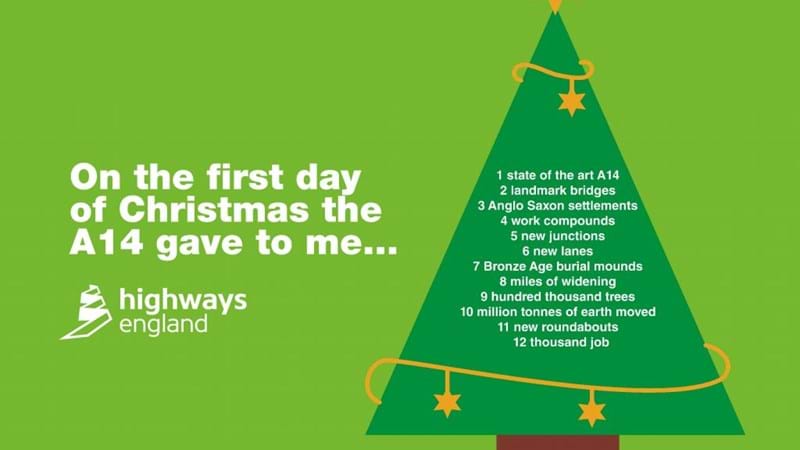 Opening two thirds of Britain’s biggest roads project a year early is just one of the many milestones celebrated by the £1.5 billion improvement in 2019.

With the A14 Cambridge to Huntingdon scheme now entering its final year, here is a festive look at some of those achievements that have been reached already – each with benefits far more real than pipers piping or partridges in pear trees.

Highways England project director David Bray said: “I hope that drivers are enjoying using the fantastic new road that opened on 9 December, and that this festive roundup of the many and varied achievements of the A14 team shine a light on the hard work that has gone into making it a reality. Our work continues into next year as we complete the widening of the existing A14 but for now I would like to wish all drivers on the A14 and our neighbours in Cambridgeshire’s local communities all the best for the Christmas and New Year break.”

Now Highways England has teamed up with the children of Swavesey Primary School to sing about the milestones of the A14 project in a festive video.

One state of the art A14

The 12-mile Huntingdon bypass opened to traffic in the early hours of Monday 9 December – a full year ahead of schedule.

The new bypass, which makes up around two thirds of the 21-mile improvement, will contribute towards shaving 20 minutes off journey times for the 85,000 drivers who travel between Cambridge and Huntingdon daily.

Work on the rest of the project, between Swavesey and Milton, continues and is on schedule to be completed as planned by December 2020.

The A14 upgrade comprises two landmark bridges, which act as gateways through the project. One, which is based at Bar Hill, will be for use by pedestrians, cyclists and horse riders, and the other, at Swavesey, will be for use by pedestrians and cyclists. Both will link to new foot and cycle paths alongside the A1307 local access road which is currently being built, as well as into the existing path network.

The archaeological team working on the A14 found evidence of three Anglo Saxon villages, helping to further develop our understanding of life in Cambridgeshire after the Romans left Britain.

Each of the three villages was of a different character, with one a linear village along the A1 at Brampton Hut (which was then a Roman road), the second a planned village at Houghton, and the third a fortified hilltop village at Conington (which is Saxon for “King’s Town”) believed to be a border settlement between the Dark Age kingdoms of East Anglia and Mercia.

The A14’s workforce has been spread across four site compounds along the length of the project, with two of these similar in size to a small village, such as the one at Brampton (pictured below).

The new Huntingdon bypass provides extra links to and from the A14 for the surrounding local villages, with five new or significantly redesigned junctions added to the improved road.

The new Huntingdon bypass now gives drivers three lanes to take in both directions, adding capacity to an important national road that had long suffered from congestion. When the project finishes by the end of 2020, the A14 will be three lanes in both directions along the whole 21 mile upgrade, with four lanes in each direction between Bar Hill and Girton.

Some 1,700 runners and cyclists were among the first people to set foot on the new A14 Huntingdon bypass on Saturday 12 October (pictured above), raising over £17,000 for local charities the East Anglian Air Ambulance and East Anglia Children’s Hospices by completing the A14 Great Ouse Challenge.

Finding one burial mound dating back to 2,000 BC may be remarkable, but the A14 team found seven during the course of their excavations, including the one pictured below.

Further fascinating discoveries included the earliest evidence of beer brewing in Britain, dating back to 400 BC, and only the second coin of an ill-fated Roman Emperor to be found in Britain.

The new 12-mile bypass to have opened between Swavesey and Ellington is only a part of the scheme, with the rest of the project seeing over 8 miles of widening of the existing road to include an additional lane added between Milton and Swavesey, and a redesigned Girton pinch point (pictured below) to simplify the ‘Spaghetti junction of the East’.

The A14 project will be completed by the end of 2020, benefitting the local economy by reducing journey times between Cambridge and Huntingdon by 20 minutes.

The A14 team have taken their environmental commitments seriously, and have planted two trees for every one that has had to be removed to allow the new road to be built – resulting in around 900,000 trees and shrubs being planted by the project.

Further environmental work has seen them care for ten protected species, including creating new habitats such as the one pictured above for water voles.

The A14 team have reduced the environmental impact of the project and improved sustainability by using local materials, with soil extracted from seven pits along the scheme then used to form the embankments needed to keep the new road above the floodplain.

Work in these pits has been carefully done, with excavator operators coming across finds including the 100,000 year old woolly rhino skull and woolly mammoth tusk, pictured above. This careful working has not slowed them down, with the total amount of earth moved the equivalent of around four Great Pyramids of Giza.

As the new Huntingdon bypass opens, most of the old A14 will remain open, being handed over to Cambridgeshire County Council and becoming a part of the A1307. This road complements over 5.5 miles of local access road that has been built by the project, to ensure local residents are able to travel locally without the need to use the A14 if they do not wish to, and slow moving vehicles can maintain the access they need.

Most of these new roundabouts, including those pictured near Girton (above), connect this local access road to the various villages along the length of the new A14.

At its peak, there were around 2,700 people working on the A14 project every day, with the scheme having already employed almost 13,000 people to date.

Their work has covered a huge range of specialisms, both administrative and operational, including working round the clock to finish work 24-hours early in mid-September 2018 when two 1,000 tonne bridges were lowered into place at Bar Hill, having been prepared beside the road in advance.

Thank you to the Swavesey Primary School children for performing the Twelve Days of A14 Christmas song for us! Click to see their video.