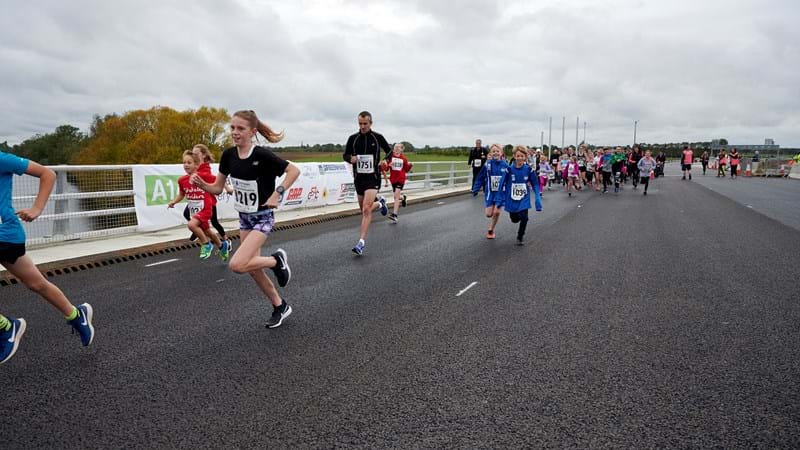 Some 1,700 runners and cyclists were among the first people to step foot on the brand new A14 Huntingdon bypass on Saturday, raising thousands for local charities.

The budding athletes were taking part in the A14 Great Ouse Challenge on Britain’s biggest roads project, ahead of it opening to drivers later this year.

Together, they raised over £17,000 for local charities the East Anglian Air Ambulance and East Anglia Children’s Hospices in the process.

Last week, roads minister Baroness Vere announced that the new 12-mile bypass – part of a 21 mile, £1.5bn upgrade for the A14 – would open to traffic in December, a full year ahead of the original schedule. The nearly-finished road was a perfect setting for a series of races, organised and marshalled by Highways England staff working on the project who were keen to give something back to local communities with the fund raising event.

The day saw a mixture of races, first with wheelchair athletes and then cyclists completing their choice of seven kilometre or 14km courses, with runners then able to tackle the same distances, or a children’s 1.4km fun run, in the afternoon.

“It was great to see so many people turn out to support this community event. With a variety of distances available, we had people of all ages and abilities taking part. Memorable moments included seeing one of our 14-kilometre runners proposing to his girlfriend upon finishing, and seeing his delight when she said yes. We also saw a two-year-old girl running with her mother to raise over £2,200 for a stroke charity, as her father had suffered from a stroke recently. Another young girl completed the bike ride, raising more than £500 for Hedgehog Protection.

“The feedback we had from those taking part was universally positive, and people really enjoyed this once in a lifetime chance to experience the new road before it opens to traffic. I want to thank all our athletes for taking part, my colleagues and partner organisations who contributed to and volunteers at the event, and our organising partners HaverSports, St Ives Cycles, Huntingdonshire Athletics Club, and Living Sport.

“The new A14 will do so much to connect and improve communities along the whole route, but we do appreciate it’s not easy living beside such a big construction project, and this is a great opportunity to give something back, both by giving local people the chance to experience the new road before it opens, and also raising more money for local charities, with the project having already raised over £500,000 for local good causes since work started.”

Georgina Forbes, community fundraiser for the East Anglian Air Ambulance said: “It was great to see people of all ages and abilities taking part and experiencing the new A14. I want to thank the Highways England team for putting on this event to help raise thousands for the important work we do in saving lives across the region.”

Lottie Driver, corporate fundraiser for East Anglia Children’s Hospices, added: “It was a really enjoyable day, and particularly pleasing to see so many young people taking part to support our charity. Thanks to the A14 team for their support of our charity and helping us continue to support young people with debilitating and terminal illnesses across the region.”