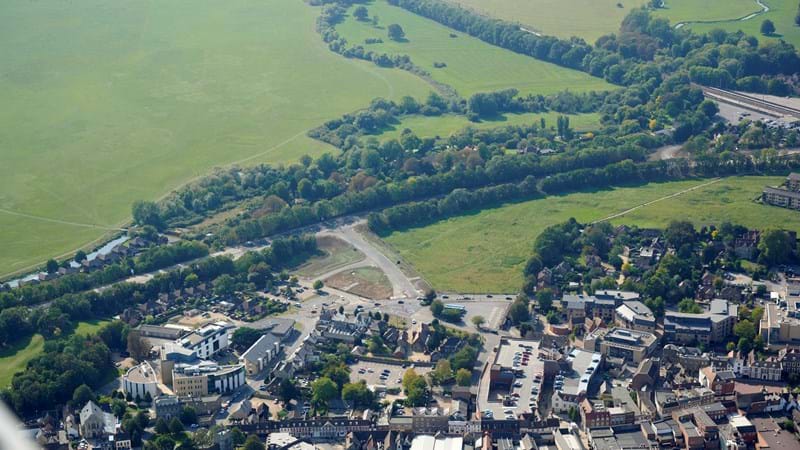 While Britain’s biggest roads project has been delivering a 21-mile upgrade to benefit 85,000 drivers daily, the team has also been working to deliver benefits for local residents.

The latest landmark reached on Highways England’s largely-completed £1.5 billion upgrade of the A14 in Cambridgeshire has seen a new local access road into Huntingdon opened at the weekend.

The 148-metre long Pathfinder Link will provide a way for people to access Huntingdon from the A1307 (the old A14) to the east. Once the work to remove the 12,000 tonne railway viaduct is completed in 2022, the old A14 will also provide another route into the town from the west.

Chris Bayliss, who has been directing the work at Huntingdon, said:

“The A14 upgrade is delivering massive benefits for the UK, including reducing journey times by 20 minutes with 12 miles of new, three-lane dual carriageway, but it is also delivering benefits on a smaller scale, for local communities.

“The opening of the new Pathfinder Way link road into Huntingdon shows that the project understands the impact on those living in and around the upgrade, and is providing for their needs. While we’re meeting the needs of A14 road users and freight, we’re also ensuring connectivity to local towns and villages.”

“Since the new A14 bypass opened at the end of last year, Highways England have been working hard in and around Huntingdon to benefit Huntingdon and its residents.

“I’m pleased the new Pathfinder Link Road is now complete, it is the first new road as part of the work in Huntingdon to open. There is still work to be done on the other new roads and the removal of the old A14 viaduct, but it’s great news for Huntingdon and even better it’s in time for when the schools go back after half term.”

Some 2,000 tonnes of asphalt have been laid to provide the new link road, with just under a mile of three different types of kerb installed. Four new crossings have been built for pedestrians and 30 new street lights will illuminate the road, with a mile and a half of cabling powering them. A quarter of a mile of drainage has been installed, including a quarter of a million-litre storm water tank.

Pathfinder Link is part of the local improvements which will ensure better connectivity of Huntingdon and Godmanchester to Cambridgeshire and the wider region, while improving access between the towns and their parks.

The improved 21-mile section of the A14 is a vital link which connects the East coast and the Midlands.

It opened some eight months early on Tuesday 5 May, just before the initial easing of lockdown, so it has been able to meet the demand for added capacity at a crucial time.

The new road, which has been Highways England’s flagship project and the biggest investment in a roads project in a generation, is set to bring nearly £2.5 billion of benefits to the UK economy.

Businesses are also set to get a boost from the project, saving on average £70 million every year, shaving up to 20 minutes off journeys and strengthening links between the Midlands and the East of England – vastly improving access to and from the UK’s largest container port at Felixstowe and making it more efficient to ship goods nationwide.

With around 85,000 drivers using the section every day before work started, including many more lorries than a typical A-road, the A14 suffered from heavy congestion on a regular basis.

The project was due to open in December this year, but efficient and innovative working by the team saw the last of the 24/7 roadworks removed in May, with the 12-mile long new bypass opened a year ahead of schedule in December 2019.

Essential work on the upgrade continued throughout the COVID-19 outbreak, and a number of measures were also put in place to ensure work was completed safely and in line with Public Health England’s advice.