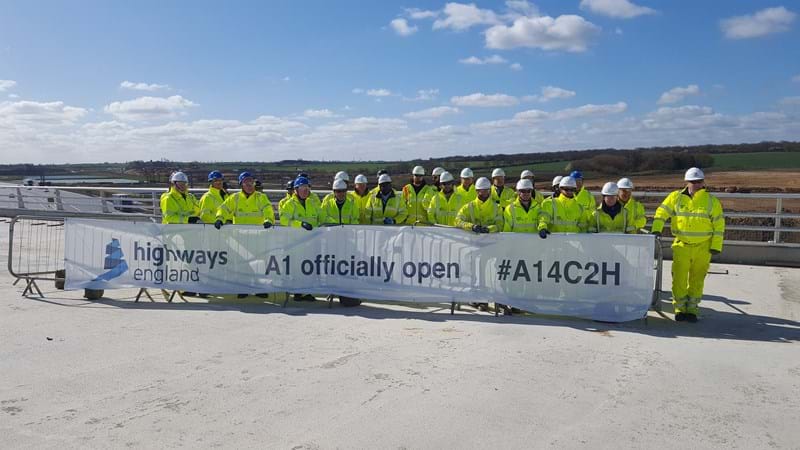 The A1, Britain’s longest road, has been boosted with 7 miles of new lanes after an improved section of it opened to traffic on Monday 25 March.

3.5 miles of the A1 in Cambridgeshire has been widened from two to three lanes in each direction as part of Highways England’s £1.5 billion project to upgrade the A14, the country’s biggest road upgrade.

Today, the extra lanes are open to traffic and the A1’s 70mph speed limit has been restored, benefitting the 31,000 drivers who use it every day.

Highways England is upgrading 21 miles of the A14, the East of England’s major trunk road, between Cambridge and Huntingdon. The improvements include creating seamless links between the A14 and the A1, with a redesigned junction and widening of the A1 either side of it.

The improvements the A14 scheme is delivering will boost the local and national economy, upgrade a key link between the East coast and the Midlands and save up to 20 minutes for the 85,000 drivers who use it every day. And, with a decision due soon on designating part of the improved A14 and A1 as motorways, the project could create a continuous motorway from London to Peterborough for the first time.

“Today is a great step forward for people living, working and driving in and around Cambridgeshire as we open the first section of this ground-breaking road upgrade. The A14 sets the standard for how Highways England is delivering the first class infrastructure that the country needs to be successful, and it is great to see this new section of the A1 opening for traffic. It is just a taste of the huge benefits that the A14 upgrade will bring.”

Highways England Project Director for the A14 Cambridge to Huntingdon improvement scheme, David Bray, said: “This is a big step in delivering a new, improved A14, and drivers can see just how much work has been done over the last couple of years. The upgraded A1 will fit seamlessly together with the new A14 and improve journeys on both roads.

“The A1 is a vital road for England, just as the A14 is for the East, and we’ll have transformed both in this area into three-lane, 70mph roads, making journeys safer and faster. The A1 is just one of six phases of the overall A14 upgrade project, and our 2700-strong team is working tirelessly to deliver the rest of this huge scheme, with work expected to be complete by the end of next year.”

At 410 miles the A1 is Britain’s longest road, connecting London to Edinburgh. The A14 meets the A1 at Brampton in Cambridgeshire and, as part of the A14 project, Highways England has widened it from two lanes to three in both directions between Alconbury and Buckden and built a redesigned junction at Brampton Hut.

Alongside the upgraded A1 there will also be a new local access road to help drivers making local journeys to get around. This will run from the new Ellington junction alongside the A1 northbound and is in addition to the new five-mile long local access road running parallel to the new A14 between Cambridge and Huntingdon, the first section of which opened to traffic on Monday 18 March. Together, they will strengthen local links between villages, improve access to Cambridge for local communities and will become part of the local road network when the new A14 opens.

Cllr Ian Bates, Cambridgeshire County Council’s Chairman of the Economy and Environment Committee, said: “This is more great news for the residents and drivers of Cambridgeshire and another milestone achievement. These improvements to the A1, between Alconbury and Buckden, will provide a smooth link into the A14 avoiding the Brampton Hut roundabout and improve journey times. There will also be a local access road alongside the improved A1 from the new Ellington junction connecting local communities without them needing to use the A14. We’re looking forward to the opening of the whole A14 Cambridge to Huntingdon upgrade.”

Councillor Graham Bull, Leader of Huntingdonshire District Council, said: “The new A14, and the improvements to this section of the A1, are key to ensuring that Huntingdonshire can fulfil its potential as a truly great place to live, work and invest, and we are delighted to see new sections of the road beginning to open. It is part of an important wider network, including the A428 and the A1 between Buckden and Black Cat, which we are keen to work with partners to continue to improve.”

There will still be some finishing works on the A1 such as completing the Woolley Road access, commissioning the gantries to help share real time information with drivers, and completing the links to and from the new A14 later this year. This work will require some overnight closures and information will be shared in advance so people can plan journeys.

The A14 Cambridge to Huntingdon project is now more than half way through construction. Nine of the project’s 34 bridges and structures have already opened to traffic and the longest one, the half-mile long River Great Ouse Viaduct, was completed in February. The team has worked hard to protect and enhance the natural environment, and made incredible archaeological discoveries including a 100,000-year-old woolly mammoth tusk and woolly rhino skull, and more recently the earliest evidence of beer brewing in Britain, dating back to 400BC.

The A14 project is due to be completed and fully opened by December 2020.