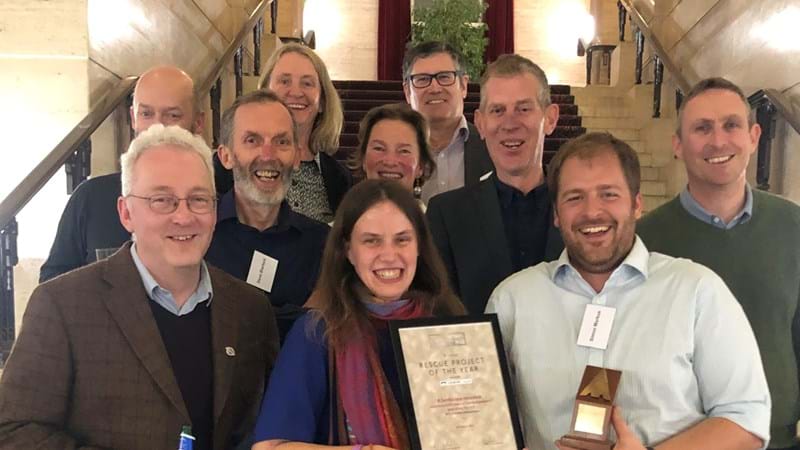 In a public vote, the archaeological work carried out as part of the company’s £1.5 billion upgrade of the A14, the crucial route linking the East of England and the Midlands, was awarded the top gong.

The accolade for the improvement scheme comes as Highways England progresses projects across the country to uncover more and more of England’s rich past.

The improvement of the A14 between Cambridge and Huntingdon was honoured with “Rescue Project of the Year” accolade in the 2019 Current Archaeology Awards.

A team of up to 250 archaeologists led by experts from MOLA Headland Infrastructure has been investigating 33 sites across 360 hectares.

Finds so far on the A14 have included three Anglo Saxon villages, an abandoned medieval village, 100,000-year old woolly mammoth tusks and a woolly rhino skull, a Roman supply depot and rare Roman coins from the third century.

Experts on the scheme also recently uncovered what is believed to be evidence of the first beer brewed in the UK, dating back as far back as 400 BC.

The project trumped competition from teams working on projects including the excavation of human remains from the Anglo-Saxon and Norman eras, and exploring an 18th Century German mercenary camp, to receive the award.

Dr Steve Sherlock, Highways England archaeology lead for the A14, said: “We are all thrilled to win this coveted award that recognises the partnership and team working we have been doing that has made the A14 such a great project to be involved with.

“The team continues to make remarkable discoveries that are shaping our understanding of Britain’s history, and even though the bulk of our archaeological fieldwork is done now, I look forward to seeing what we continue to find over the remainder of the project, and sharing these discoveries with the communities we’ve been working in.”

Kasia Gdaniec, Cambridgeshire County Council’s archaeological adviser, added: “Great thanks must go the readership of Current Archaeology and the wider public who voted for the A14 Project and who found the diverse archaeological stories and discoveries of this Cambridgeshire scheme to be so engaging. Thanks go, too, to Highways England and the A14 management team for continuing to support this important archaeology programme, which has showcased people’s livelihoods, settlements and burial practices over 6,000 years.

The A14 improvement, due to open to traffic by December 2020, is upgrading a 21-mile section between Cambridge to Huntingdon, which will speed up journeys by up to 20 minutes, adding capacity and boosting the local and national economy.