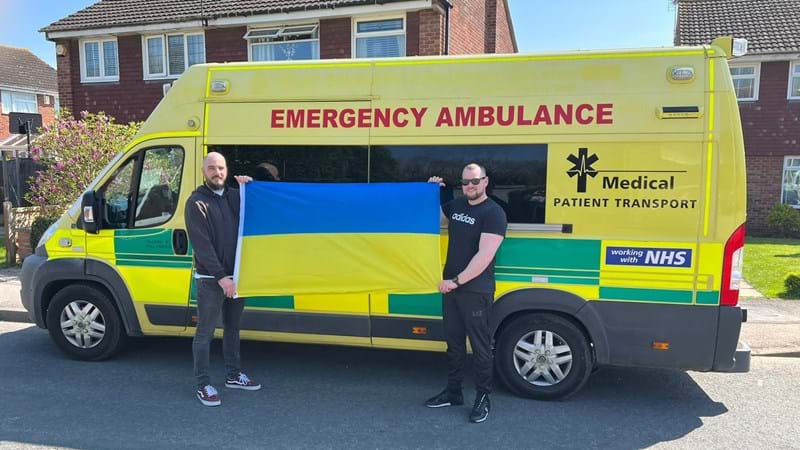 In a 32-hour mercy dash, Alex Brown and Tyler Bond travelled to Przemyśl in Poland to hand over the ambulance to a charity working in the Kharkiv region of eastern Ukraine.

It is a second humanitarian aid trip by the traffic officers from Nottinghamshire who were spurred into action after seeing the shocking images from the war zone.

In March the pair, along with colleague John Cray, hired a van and travelled to Chelm in eastern Poland to hand over clothing, toiletries, toys and supplies that had been donated by local people, friends and family, to help those fleeing the fighting in Ukraine.

They took the items to a charity which temporarily houses women and children refugees until accommodation can be found for them.

"The vast numbers of people who had fled their homes in Ukraine was unreal. We saw bed after bed after bed of families and children. We could have taken over 10 vans or more and it still wouldn’t have been enough for all the people there."

"Speaking to people on the ground we learnt that they were desperate for medical supplies and transport to help injured civilians and soldiers."

"Once we got home we actually felt quite deflated knowing there was so much more that was needed. We felt even more invested in the situation."

So the workmates, who are all based at the Felley outstation in Nottingham, set up a Crowdfunder page to raise money to buy an ex-service ambulance and some field supplies such as bandages, compresses, dressings and medical scissors.

“It caused quite a stir in Boots when I asked if they had bandages big enough for gunshot wounds,” said 35-year-old Alex from Derbyshire.

Initially unsure that people would continue to donate, they raised £7,000 within a few weeks. On April 23 they set off again for Poland in the ambulance taking the medical supplies, food and more clothing, toys and toiletries that had been donated.

They presented the ambulance to The Kharkiv and Przemyśl Project (KHARPP) which is a grassroots organisation supporting the humanitarian relief effort in Ukraine’s second largest city, Kharkiv, and in the Polish city of Przemyśl. Alex had made contact with the charity through social media. 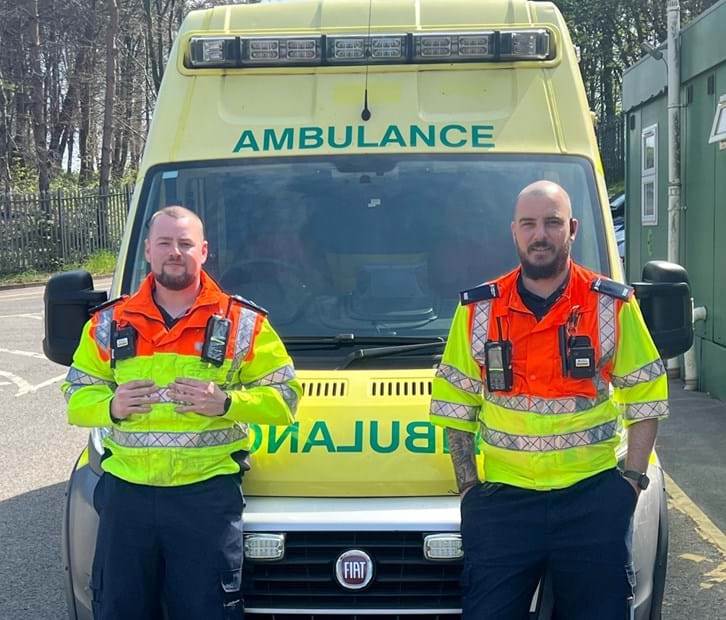 (Tyler, left and Alex, with the ambulance which was taken to Ukraine)

Alex and Tyler are now working with KHARPP to transport another three ambulances and supplies over. Ty, who is 34 and lives in Nottingham, said:

"These trips across Europe to the Ukraine border are among the hardest things I’ve ever organised and been part of. Juggling work and a home life whilst planning these trips is an art but I believe we’ve mastered it. Seeing the faces of the people on the other end when we arrive makes it all worthwhile."

"I have met some incredibly selfless people doing this and I’m really proud to be able to say we are doing our bit, but so much more needs to be done. After witnessing the situation first hand, I can say that the biggest differences out there are being made by everyday people just doing what they can which is amazing and humbling to see, heroes don't always wear capes."

More volunteer drivers will be needed to help get the ambulances over to Ukraine and fundraising is under way again to cover costs but it is hoped that the charity will be able to help meet the cost of buying the ambulances.

"We are so grateful for the amazing work done by Alex and Tyler in procuring the ambulance and getting it to us in Poland. It is already being used in Kharkiv, providing vital primary support for the people who need it most. Thanks to Alex and Tyler's work, we will be able to source three more ambulances - another for Kharkiv, and one each for the liberated towns of Bucha and Irpin."

"Our work is entirely grassroots-led, meeting the immediate needs of Ukrainians on the ground in areas which major charities and NGOs aren't able to get to. It is thanks to people like Alex and Tyler that we are able to continue this work, both on the Polish border, and in Ukrainian hotspots like Kharkiv."