The Queen Elizabeth II bridge at Dartford has been given the royal makeover in preparation for its place in the spotlight this holiday weekend for the Queen’s Platinum Jubilee. 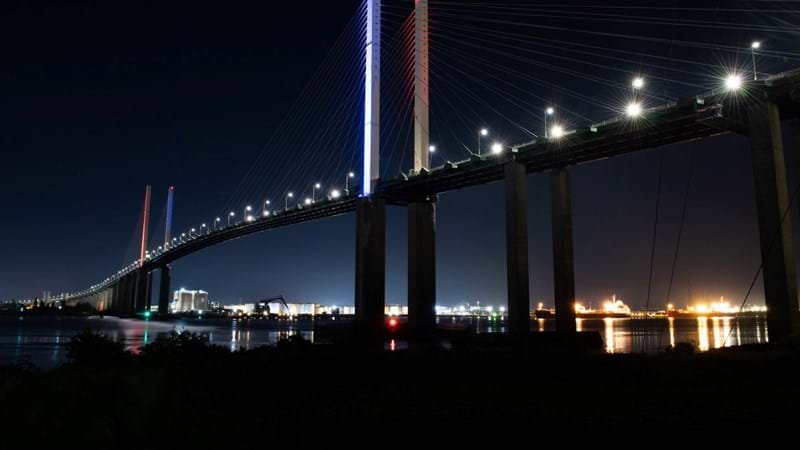 The bridge, which has played a crucial role on the M25 motorway for more than 30 years by connecting communities in Essex and Kent, will be lit up in a sequence of red white and blue shifting colours and different intensities of light for a total of six nights – the duration of the Bank Holiday weekend.

The lights will be switched on at dusk on Tuesday 31 May and will remain so until sunrise on Monday 6 June.

These will include eight lamp units, two per tower. At over 40 bulbs per unit that’s over 320 bulbs altogether. Three LED units will light up the monument on the Essex side and three more will light up the existing control room on the Kent side which manages traffic through the tunnels and over the bridge.

“As the nation gears up for a Jubilee weekend like no other, the Queen Elizabeth II bridge can now play a starring role in the region’s celebrations, starting off this week by being bathed in the national colours for the Queen's Platinum Jubilee.

“I’d like to thank the commitment and generosity of all our partners, including Connect Plus and Port of London Authority in making this happen. I’m sure the lighting up of this iconic landmark, will prove to be a lasting legacy, remembered for decades to come.”

Built at a cost of £120m and officially opened by Her Majesty in October 1991 the QE2 bridge was the first to be built at an entirely new location along the river Thames for more than 50 years. For a short time it was also the longest single span bridge in Europe measuring over 2,872 metres long.

Beneath the waterline, the bridge rests on two reinforced concrete foundations, each of which is the equivalent in volume of 400 double-decker buses and weighing a total of 85,000 tonnes. These were constructed at a dry dock in Holland and towed across the North Sea by tugs on a 150-mile journey to the River Thames and sunk into position either side of the navigation channel.

“Connect Plus Services, on behalf of Connect Plus and National Highways, are delighted to be celebrating the Queen’s Platinum Jubilee this weekend by lighting the iconic QEII bridge.

On Sunday 5 June between 1900 and 2100hrs BBC Radio 2 will also be broadcasting an interview recorded earlier this year with Steve Pattrick (Connect Plus Services) and Iain MacKenzie (National Highways, traffic officer, Dartford) about the naming of the bridge and the current operation at Dartford.