Ancient finds uncovered alongside the A1

Archaeologists have discovered a whole host of rare finds along the A1 in Yorkshire. These give a unique insight into what life was like over a period of around 4500 years. 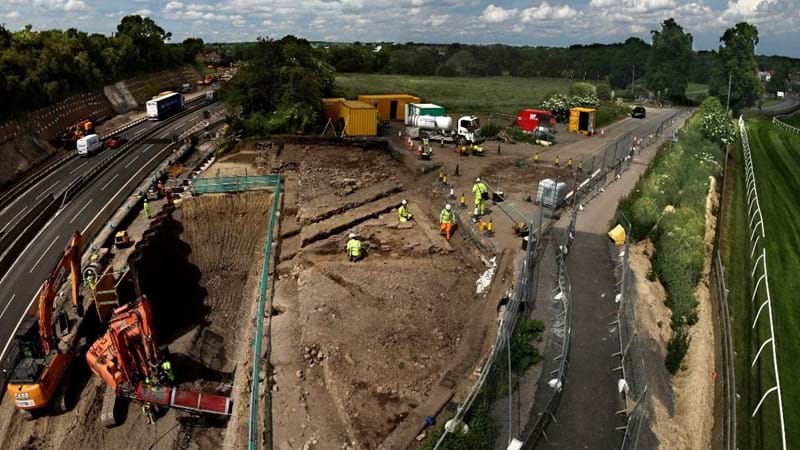 The discoveries are a result of the construction of our £400 million A1 Leeming to Barton upgrade which created 12 miles of new motorway-standard road. During the four-year construction period extensive excavations were carried out. These uncovered an extraordinary level of prehistoric and historic finds.

Now, three years since the road was opened, we’re able to publish the final Cataractonium archaeology discoveries report. This gives a rare insight into what life was like for those who travelled and settled along the route of the A1. It highlights unique finds from the Roman town and fort of Cataractonium. The report follows on from the 2018 Archaeological Discoveries report which focussed on the area around Scotch Corner.

To find out more about these, and other discoveries along the A1, check out the Archaeology Data Service’s Living Between the Monuments publication and The Evolution of Dere Street.

Staff from Northern Archaeological Associates spent more than three years investigating remains exposed by the construction. They found out a great deal about already known Roman sites. But they also found new sites which were not known about. The roadside settlement at Scurragh House is one of these and was identified 3.5km north of Cataractonium.

A total of over 62,000 items have been recovered from Cataractonium. Archaeologists also found 2.8 tonnes of animal bone and 2.5 tonnes of pottery.

Among the finds were: 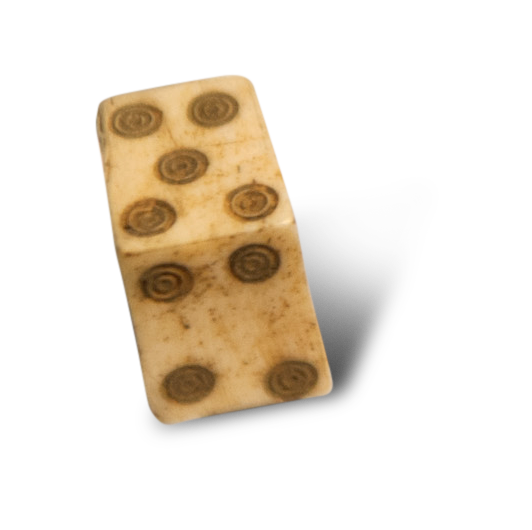 Image of a bone dice 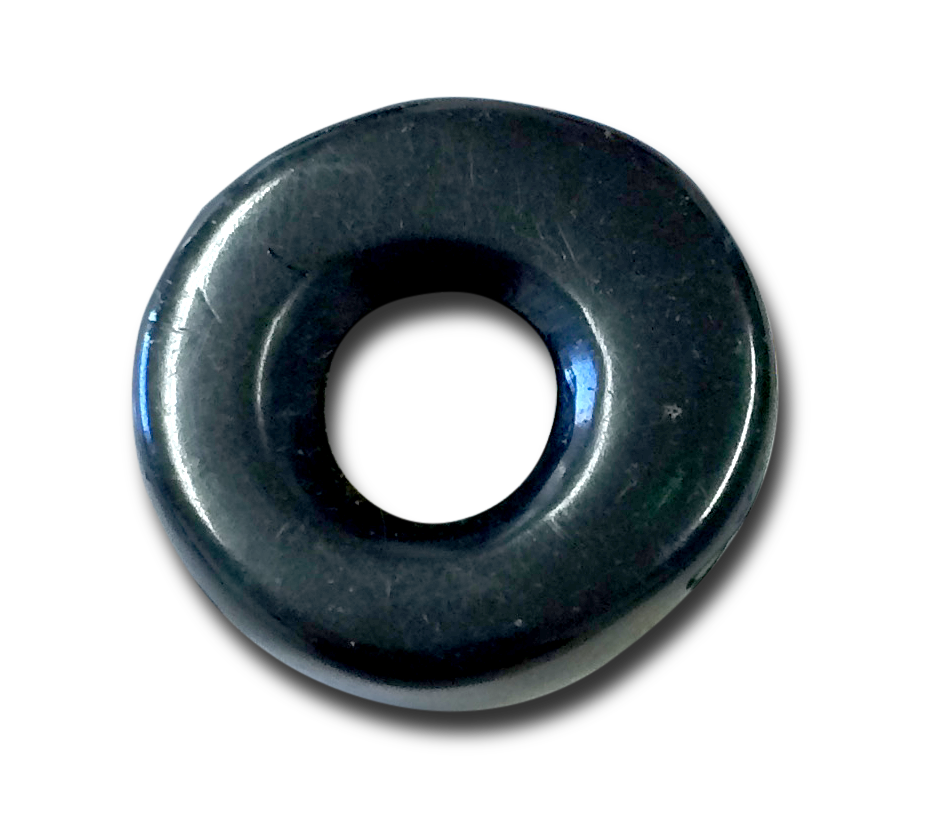 Image of a jet bead

What these discoveries tell us

The archaeological works undertaken at Cataractonium represent some of the most significant excavations undertaken of a Roman town. They have hugely increased archaeologists’ understanding of the development of the site.

The remains tell the story of the people who lived in and around the town that developed alongside the Roman fort.

The work has also added to our understanding of the Roman road known as Dere Street, which the A1 follows in this area. There’s evidence of Roman improvements to the road network and we’re still carrying-on with road improvements today.

The creation of the town and the forts

The Romans built their fort on a high point of land overlooking the River Swale. It appears to have been constructed in around AD 80 to guard the crossing of Dere Street over the River Swale.

There is evidence to suggest that legionaries and cavalry had been here at various times. This evidence includes: 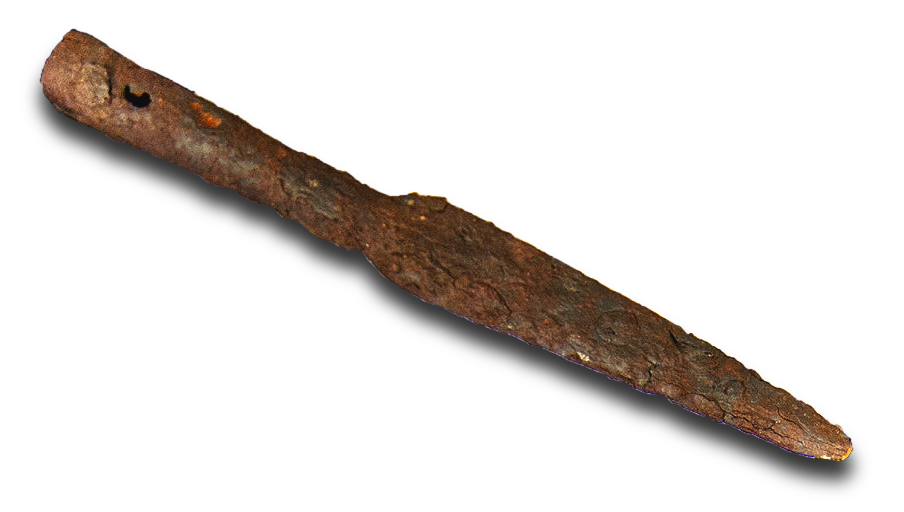 Image of an iron spearhead

At this time, the vicus was made up of timber buildings. The vicus is the civilian settlement associated with the fort. Archaeologists believe this settlement was extensive on the

ridge of ground above the river next to the fort. The A1(M) now cuts through this area.

The vicus later developed as a small town, separate from the military.

Development of the town – south of the river

By the late 1st to early 2nd century, all areas of the vicus had developed into a more formal settlement. Archaeologist found evidence of several large timber structures.

The town may have been supplied from a storage depot, part of which was identified at Fort

Bridge. This took the form of two timber granaries, a stock enclosure, and a well. The well contained the remains of a wicker basket and the earliest recorded pistachio nut found in the UK. 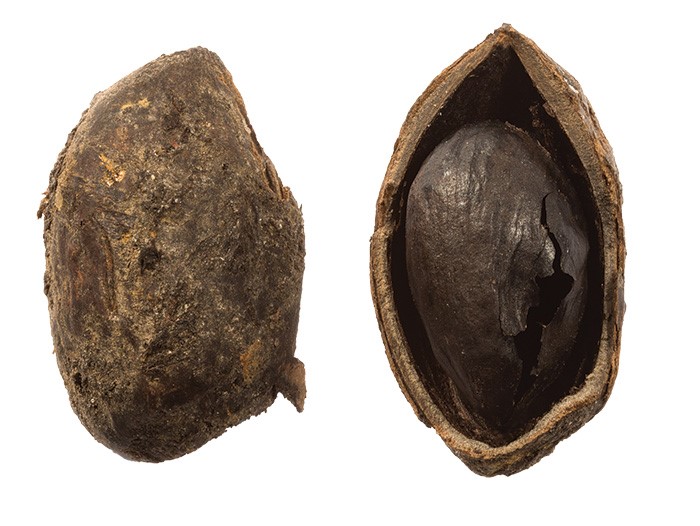 Image of the oldest pistachio nut ever found in the UK

The second century was a period of great growth and expansion for the settlement. The vicus became a more formalised settlement or town, with new timber structures. The structures were orientated to the east, with the settlement fronting onto Dere Street.

This area also contained some important buildings in the town. These buildings included a mansio with a bath wing. A mansio was a high-status accommodation block for officials travelling on the Roman road network. The example at Cataractonium was probably built in about AD 160, with the stone building probably replacing an earlier timber building. Although the mansio was probably only in use for around 40 years, the bath wing continued in use for much longer as a bathhouse.

A substantial stone-lined drain found close to the river during recent excavations probably served the bath-house. 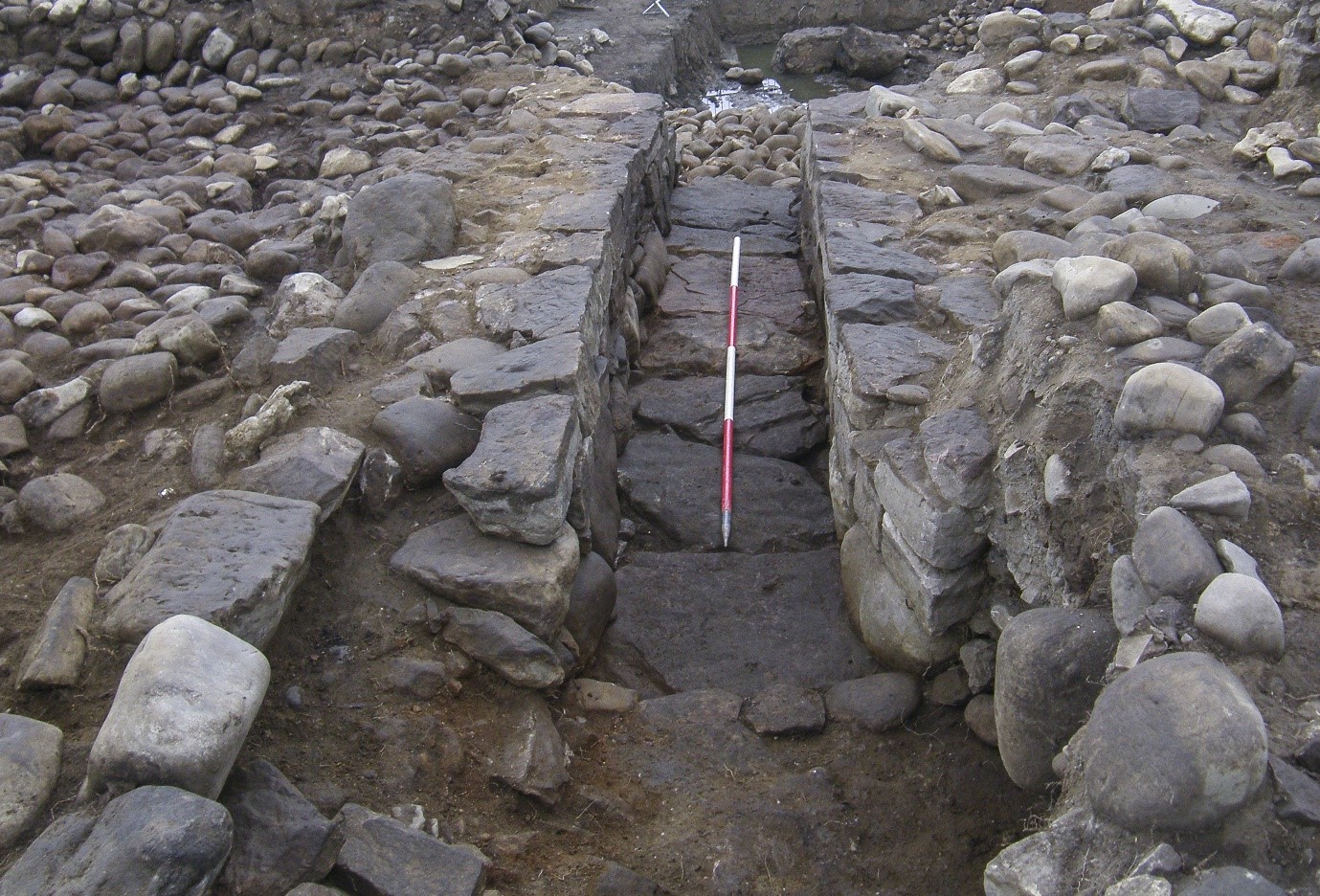 Image of a Roman drain serving the bathhouse at the mansion

The town continued to develop and be occupied by the Romans long into the 4th century.

The settlement gained a regionally high status as one of the most significant Roman towns north of York. The fact that it was next to Dere Street meant it was well linked into the transport network, just like the area is today. The wealth of the archaeology discovered in the latest investigations show that Cataractonium was much more than a stopping point, with construction of high-status buildings continuing well into the 4th century.

The Northern suburb and the defences

To the north of the River Swale was a northern suburb to the town of Cataractonium. This was likely established around AD 85. It ran alongside Dere Street.

The earliest evidence was industrial in nature, and included gravel quarries for the construction of Dere Street at Brompton East. In Brompton West evidence of workshops was found. Material called hammerscale was found, which suggests that iron smithing was taking place here. The ironworking here was probably to serve the military for the construction and supply of the fort.

After the quarries were infilled, partly by domestic refuse, two buildings were constructed. The settlement rapidly extended, running for at least 200m northwards along Dere Street. The height of Dere Street suggested that it had originally crossed the river on a bridge.

Side roads were constructed that ran west from Dere Street. Settlement further north at Brompton East contained fewer structural remains, although this may have been due to its distance from the roadside. Several ovens were situated throughout this area, perhaps to serve travellers on Dere Street, and a smithy may also have sought custom from traffic upon the main road.

In the mid-late 2nd century, the northern suburb of the walled town, although now enclosed, continued to develop with new construction taking place.

In the 3rd century the northern suburb continued to be occupied, although the importance of this area seems to have decreased, with many of the building plots on the street front vacant. Burials were discovered in the back-plots, often in the boundary ditches. This suggests that this area was seen as being outside the main settlement in this period.

The findings tell us a lot about the industry in the area during Roman times.

Metal working, particularly iron smithing, was an important activity in Cataractonium. Five hearths were found by archaeologists at Brompton East, north of the River Swale. These dated back to the early 2nd century. 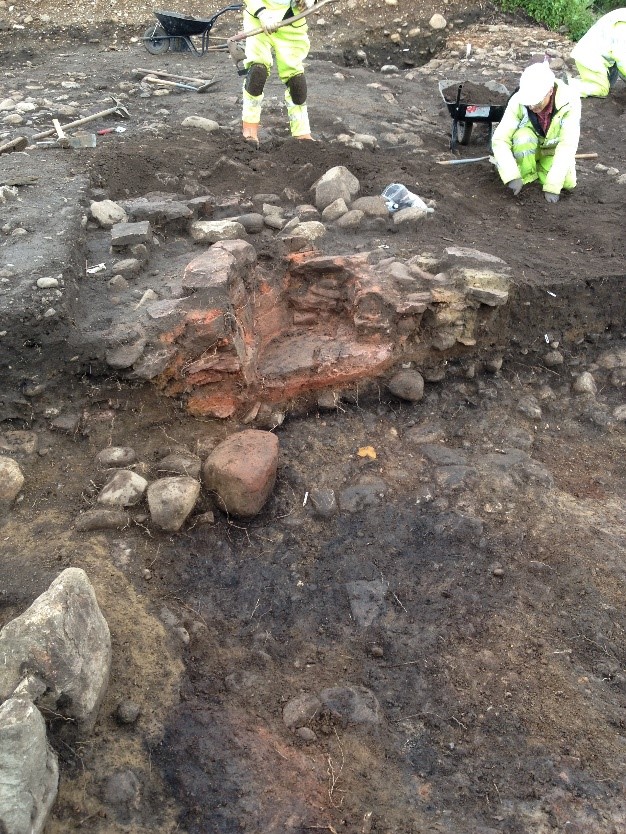 Image of archaeologist discovering a hearth at Brompton North

Archaeologists found evidence of small-scale leather tanning industry at Fort Bridge. Horn cores, finger, toe and limb bones were found here. In a ditch and the well at Fort Bridge a shoe and stitched leather from tents were found. This suggest that the military were in this area.

late 4th or the very early 5th century. But that’s not the end of the story for this area. Archaeologists also found strong evidence that the Anglo-Saxons also lived at Cataractonium. This includes a dog buried at Agricola Bridge. The dog may have worn a collar as the corner of a bone weaving tablet with a drilled hole was found next to its neck. This may have been reused as a name tag. 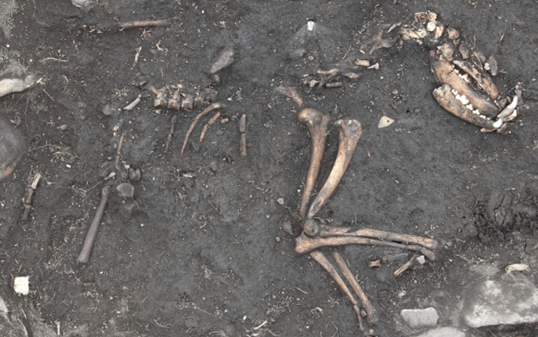 Image of an Anglo-Saxon dog burial

Cataractonium seems to have been abandoned by, or soon after, the mid-6th century.

The finds from the excavations are now held by the Yorkshire Museum in York. They’ll be safely stored and may be displayed to the public. They’ll also be made available for future research and learning.