An ultra-modern road upgrade in Cornwall is going back to traditional methods to preserve the unique landscape alongside the new route.

In the South West we are creating nearly nine miles of dual carriageway to unlock congestion on the single carriageway section of the A30 between the Chiverton Cross and Carland Cross roundabouts near Truro.

And as an integral part of the road upgrade, our delivery partner Costain have also embarked on a project to create eight miles of traditional Cornish hedges, a net gain of seven miles of hedging alongside the new route, as well as the restoration of existing hedges.

The A30 Chiverton to Carland Cross scheme itself has been designed to protect the environment and as part of construction, the project is following guidelines set out in the Guild of Cornish Hedge Builders’ bible Building Hedges in Cornwall to create the new hedging. 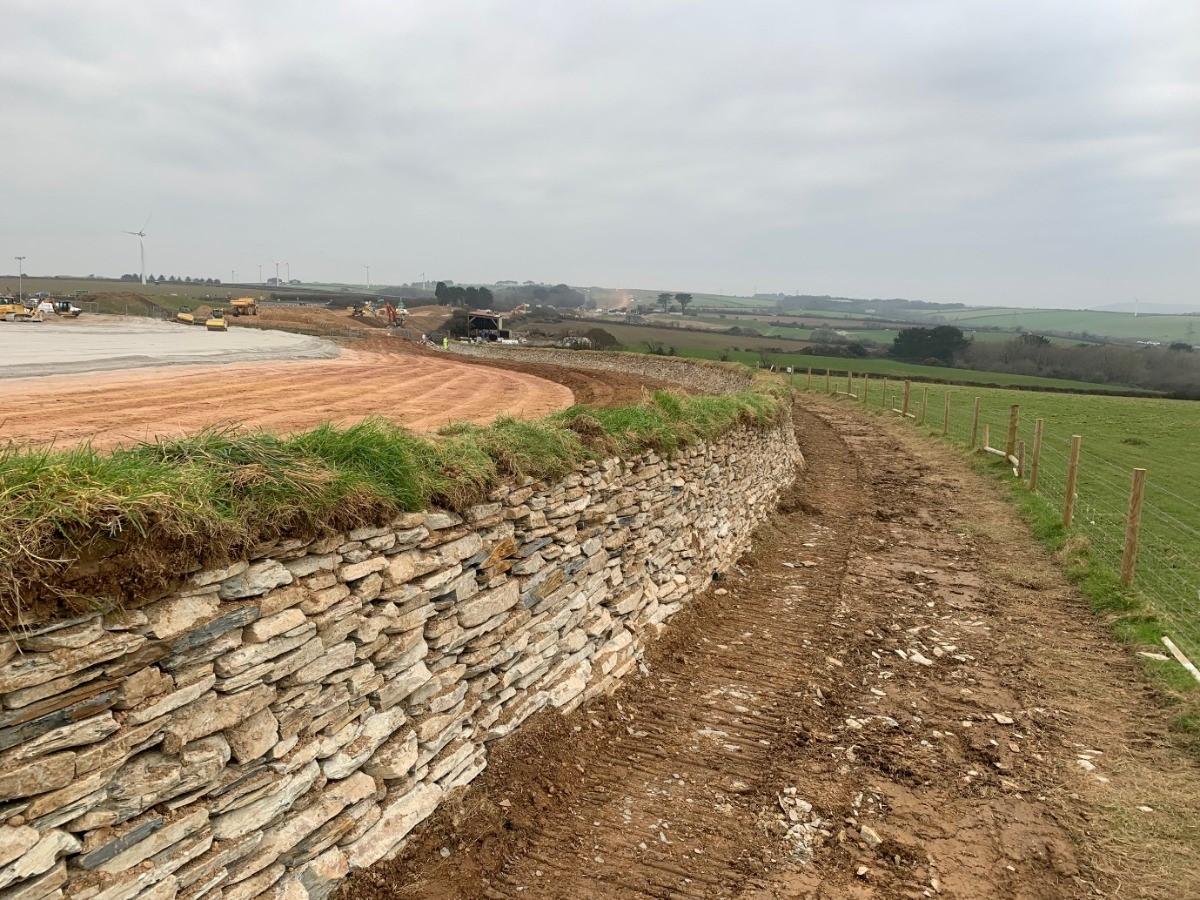 Caption: A total of eight miles of Cornish Hedges will be built across the landscape alongside the new A30 route

Particular to the county and dating from the Neolithic period – tracing back to 1,500 BC – Cornish hedges are traditionally five-foot high, stone-faced earth hedgebanks with bushes or trees growing along the top.

Stone material is being reused from existing sections of hedging which are being dismantled to make way for the new route.

The hedging is also being constructed with locally quarried slate, supplied by Cornish Stone Products from the Tynes Quarry near St Teath – just 21 miles away – and the project team are now closing in on their first milestone, the construction of the first kilometre (half a mile) of hedging.

The slate hedges will be topped off with turf, supplemented with additional planting, and this will help to create habitats for numerous species, and increase biodiversity alongside the new route.

Nick Simmonds-Screech, National Highways’ Project Director for the A30 Chiverton to Carland Cross scheme, said: “We’re really proud of the work we’re undertaking to enhance the landscape, and protect the ecology and environment in the area, and the hedging work is a glowing example of this.

“The design of the road has been carried out in the most sympathetic way for both local people, the travelling public, wildlife and the environment, and we’re currently forecasting a net gain of over 10% in biodiversity as part of the work we’re doing on the scheme.

“A rich flora develops over the lifespan of a Cornish hedge, they play an important part in biodiversity and we’re proud to be adding to the already 30,000 miles of hedging across the county.” 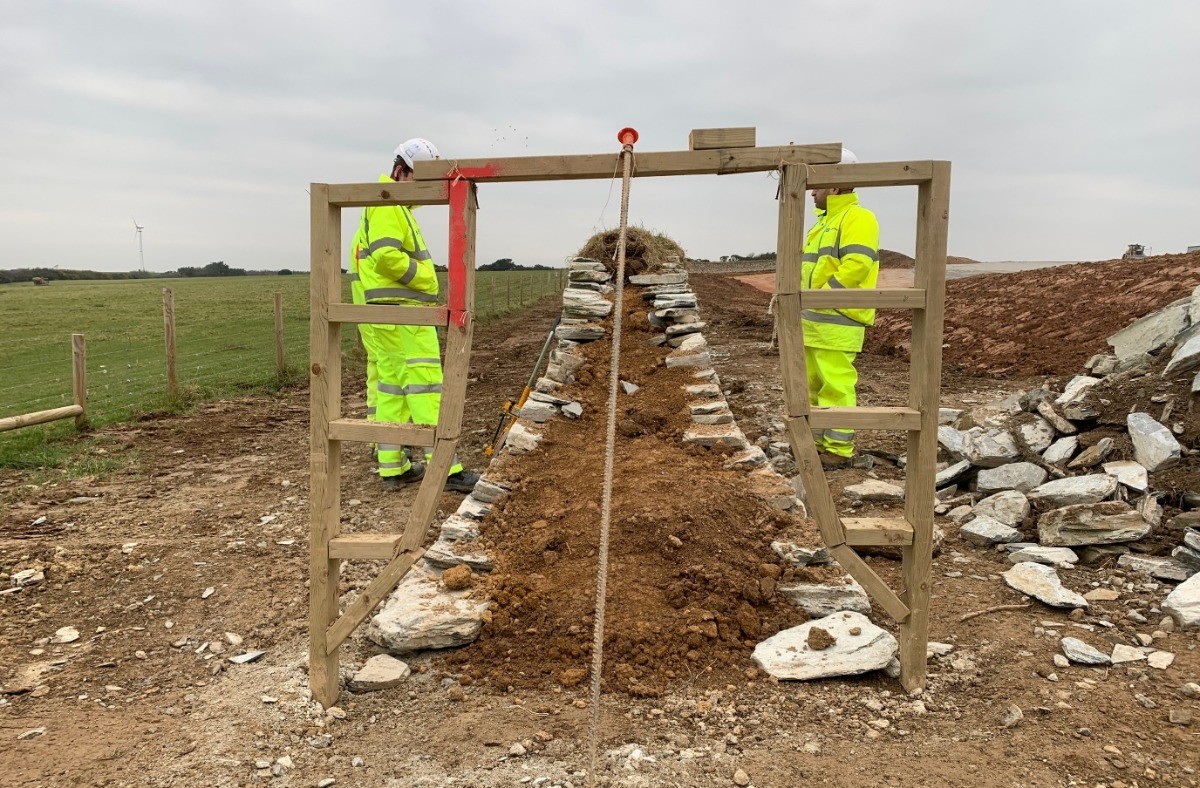 In addition, a total of 33 multi-species crossing points, including a ‘green bridge’ at Marazanvose, are being constructed to assist the habitats and journeys of animals such as otters, badgers, bats and reptiles.

Extensive ecological surveys identified otter, badger and bat habitats to the north and south of the new route and, as well as the construction of a ‘green’ bridge at Marazanvose, the crossing points include 11 underbridges, two overbridges, five drainage culverts and two dry tunnels – all allowing for the safe passage of animals.

The scheme will also see over 28 miles of new drainage to protect the local area and water courses, new filtration ponds, native tree planting, the construction of earth barriers and sound-absorbing fencing.

Here at National Highways we have just provided Cornwall Wildlife Trust with over £¾ million to deliver further environmental and biodiversity schemes bordering the dualling scheme.

As part of our Designated Funding programme, we have given £785,000 to the Trust to restore and recreate 16.8 hectares of woodland, orchard, grassland and heathland around Ladock to Gwills and Benhaven to Lambourne Mill.

The Environment Agency is also providing £50,000 towards the ‘green ribs’ projects, which will help to tackle decreasing biodiversity within the county by:

The ‘green ribs’ work, to take place in the second roads investment period up to 2025, builds on previous design and construction work within the first roads investment, particularly between Benny Mill and Boswiddle.

This programme included tree works, planting of species-rich grassland and wet meadow, pond and wet habitat restoration and boundary works, and £208,000 from the first investment period is being carried forward to the latest programme.

In the meantime, construction is stepping up this year, and local communities and road users will be kept informed as the scheme progresses.