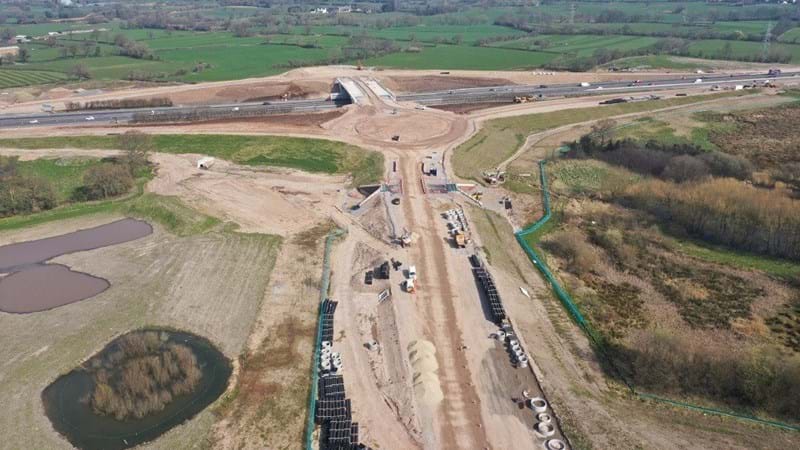 A new junction – the ‘missing’ junction 2 – is being built along the M55 as part of the wider Preston Western Distributor Road project. Lancashire County Council and main contractor Costain are delivering the scheme and are building the new junction on behalf of ourselves.

The new aerial pictures show how much progress has been made since the motorway was closed for part of a weekend in January as an old footbridge near the new junction was successfully removed as part of the project.

A two-minute time lapse video of the demolition was produced at the time, but the new aerial pictures show how much progress has been made since with the new motorway bridge itself all but complete. 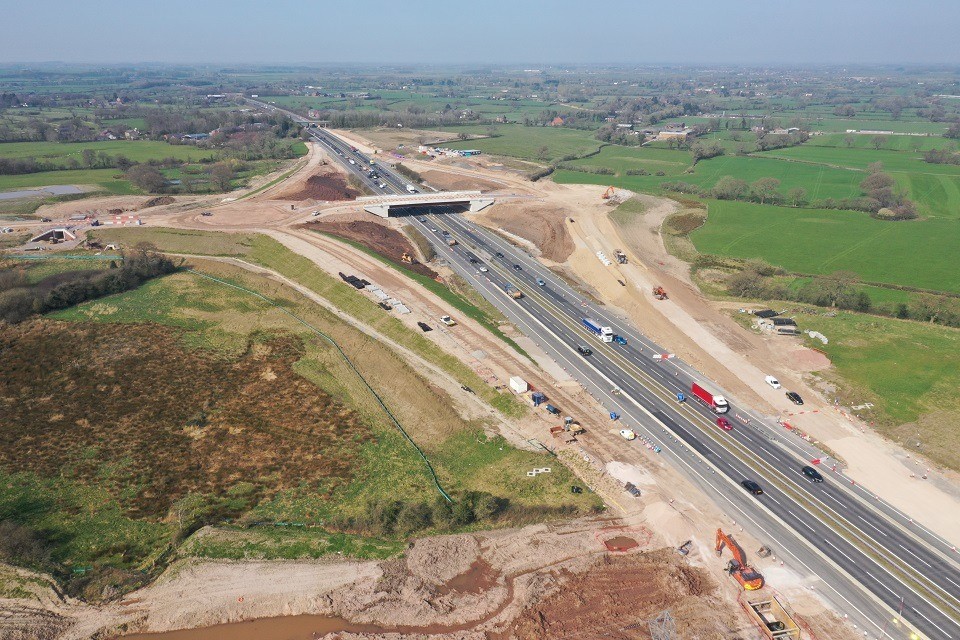 Caption: Work on the new junction and the northern section of the new link road pictured from the sky

Brian Smith, our senior project manager, said: “It’s always exciting to see a project of this importance moving from the drawing board and becoming a reality as these new aerial pictures demonstrate. The new motorway junction is a vital component of the PWDR project, supporting the local economy and reducing congestion at other junctions along the motorway.”

Work on the new motorway junction started in October 2019. The new road and motorway link are due to open early next year.

The junction bridge beams were lifted into place and installed last June and the latest photographs show progress with the ‘dumb-bell’ arrangement featuring a roundabout on each side of the motorway to serve the new slip roads. Work has now started on the foundations for new gantries and CCTV installation along the motorway.

The new road to the west of Preston will link the M55 to a new junction with Blackpool Road at Lea. The new motorway junction is being constructed between Swillbrook and Higher Bartle.

County Councillor Charlie Edwards, Cabinet member for highways and transport, said: "Work is progressing well on this landmark project and images like this that show the real-time progress our teams on the ground are making. This progress is due to our multiple partners and contractors working well together with the overall aim to get this road built so it can start to benefit our community.

"The Preston Western Distributor will improve how people live, travel and work in the area, as well as open up access to new homes for development, for the benefit of people and their families."

The £207 million Preston Western Distributor scheme is the biggest new road programme funded in the Preston, South Ribble and Lancashire City Deal. As part of special ‘designated’ funds to support the generation of new jobs and building of new homes, we’re contributing £25 million. Lancashire Enterprise Partnership is also supporting the project supported with £58 million from its Lancashire Growth Deal programme.

Debbie Francis OBE, Chair of the Lancashire Enterprise Partnership, said: “It’s fantastic to see the development of the Preston Western Distributor from up above. The project has been helped by £58 million of LEP Growth Deal funding and is a great example of how investments of this type have a significant impact on the regional economy, facilitating growth through improving local transport infrastructures.”

The road is the biggest new road programme in the City Deal - an agreement between the Lancashire Enterprise Partnership and Preston City Council, South Ribble Borough Council and Lancashire County Council, along with central government and Homes England.

The City Deal will help to deliver new infrastructure, new homes and more jobs over ten years. It will help to create more than 20,000 new private sector jobs and see over 17,000 new homes built across the area, along with new school places, open green spaces and new health provision for the growing population.