A14 Cambridge to Huntingdon - finishing works

A14 Cambridge to Huntingdon - finishing works

The latest finishing works that are taking place can be found below in the 'Project information area' of this page.

Plans for the area around Huntingdon railway station and the demolition of the viaduct have been revealed as the A14 Cambridge to Huntingdon improvement scheme enters its final stage.

The plans will transform Huntingdon station into a transport hub for the town. This will include a new car park for train users, better access for buses, improved footpaths and improvements to the environment including significant tree planting.

As well as the construction of a brand-new ground level car park on the east side of the station, we will also add an extra level to the car park on the west side. This will replace all the parking spaces lost to the new road layout.

The improvements to the railway station car park follow on from the opening of a new link road connecting the A1307 at Views Common with Hinchingbrooke Park Road. The stretch of road, which is just under a mile long, runs alongside the Police and Fire Headquarters. It will reduce congestion in Huntingdon town centre and on the ring road by providing better access to major roads such as the A141, A1 and A14.

Recent work has also seen the dismantling and demolition of the final sections of the old A14 viaduct which ran over the East Coast mainline railway. The 12,000-tonne structure had been out of use since the new bypass on the A14 linking Cambridge and Huntingdon opened back in December 2019. 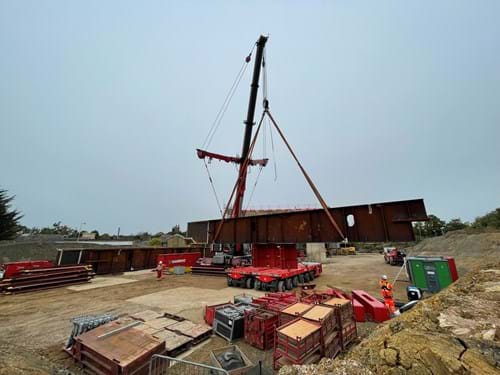 Once the final sections of the viaduct have been removed, we will begin work on the improvements to the railway station car park and surrounding areas. Thousands of people use the station every day. As well as improving the car park the work will provide better access for buses and give a new lease of life to the area.

Work to remove the final sections of the viaduct will take place over two months. Work is being done on two weekends to move the southern section away from the East Coast Main Line. It’ll then take seven weeks to lower the southern section to ground level, before demolishing it.

The equipment used to remove the southern section will then be transferred to the northern section. Work will begin by moving it away from the East Coast Main Line, over two weekends, followed by the same seven-week process to lower it, demolish and clear the area.

The construction of the Mill Common Link Road can only take place once the viaduct has been removed. However, we are carrying out as much work as possible whilst the viaduct is being removed. This will minimise the time needed to connect the road with the Edison Bell Way / Brampton Road junction.

The old A14 between Godmanchester and Spittals will be closed on 9 December when the new Huntingdon southern bypass opens. This closure will remain in place for viaduct removal and will join into new link roads in Huntingdon once all works completed by early 2022.