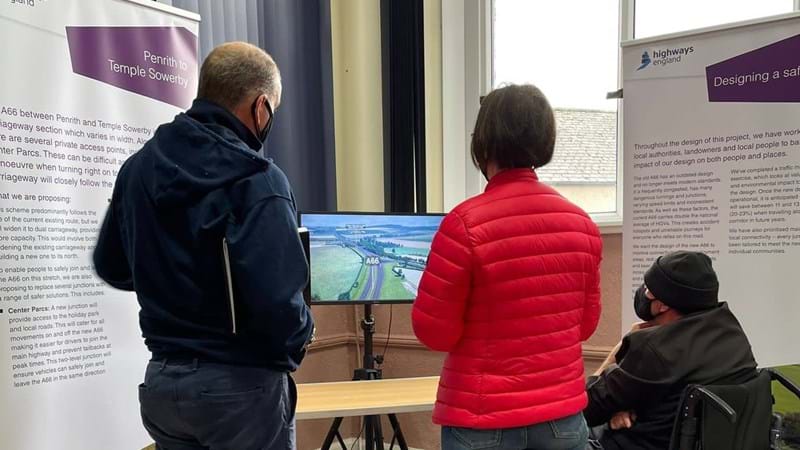 The A66 £1 billion dualling consultation has reached the halfway point in its six-week run to gain the views of the communities, drivers and businesses who use this important Trans-Pennine route.

A series of drop-in events giving the public a chance to have a say on plans to transform the A66 have come to an end – but we're still urging people to voice their opinions through other channels over the next three weeks.

We're proposing the biggest investment on the north’s road network for a generation and are midway through the consultation on the latest designs for the project.

You have until 6 November to feed back on the plans to improve the A66 between M6 junction 40 and A1 at Scotch Corner, by dualling the remaining sections of the route and improving a number of key junctions.

Members of the project team ran 24 drop-in sessions to answer any questions on the proposals and encourage attendees to provide their feedback. In a world-first, some of the events included the use of SoundLab, a pioneering piece of equipment provided by Arup, creating the unique opportunity to listen to the expected noise levels and understand the improvements which mitigation methods such as special road surfaces and sound barriers will provide.

"The good news is, there is still plenty of time left for those who have not yet participated to get involved and give us their thoughts"

“We are delighted with the way the sessions were received and I want to thank everyone who took the time to come along and learn more about our plans. The good news is, there is still plenty of time left for those who have not yet participated to get involved and give us their thoughts.

“The reason we extended the consultation period from the planned four weeks to six was to give people every opportunity to engage with us, including our upcoming webinars, on the dedicated project webpage and on social media.”

The statutory consultation period runs until 11.59pm on Saturday 6 November and will help National Highways put together its application for a Development Consent Order which, if successful, would pave the way for the scheme to go ahead.

Webinar Q and A sessions

We are holding webinar sessions at the following dates and times:

To book a place, please send the following details to the National Highways inbox at A66NTP@highwaysengland.co.uk 24 hours in advance of each session:

A link will be sent to you 24 hours in advance of your session.

All the consultation materials, including the brochure, are available on our website. Hard copies will also be provided for viewing in public buildings along the A66, such as local libraries.

For more information visit our web pages, email A66NTP@highwaysengland.co.uk, or call 0333 090 1192. Phone lines are open between Monday and Friday, 9am to 5pm, or you can leave a message and the team will return your call.