A day in the life of a National Highways Traffic Officer

Running through Oxfordshire and Berkshire, the A34 is a vital road in this busy region of the country. We know that there are issues linked to congestion on the A34 between the M4 and M40 and around Oxford. Congestion on the road leads to unreliable journey times and can affect safety. 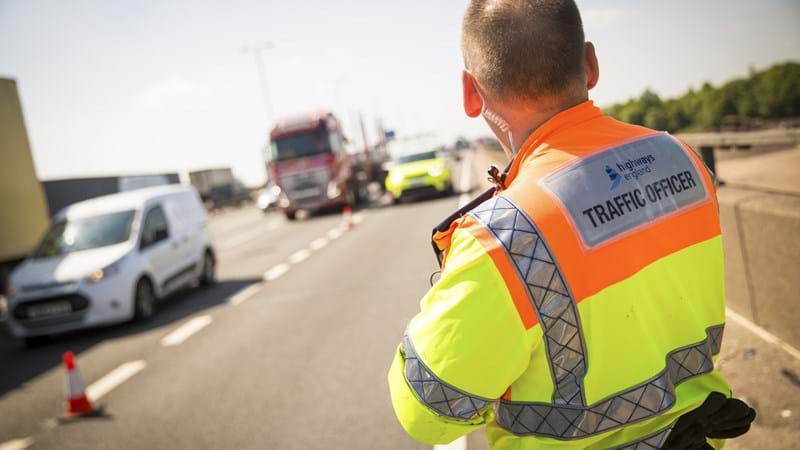 When driving on motorways and some A-roads you will often see the black and yellow National Highways patrol vehicles. Whether they are simply monitoring traffic or assisting with breakdowns or incidents, our traffic officers are there to keep everyone who uses the strategic road network safe.

But what does their job involve? How do they contribute to keeping England’s major roads safe?

Despite being some of the country’s most visible and important workers, many people are simply unaware of what they do in their day-to-day job.

National Highways Traffic Officer Nigel Millward gives us some insight into his work in the region.

So, Nigel would you mind telling us a little bit about yourself?

I’d be delighted to. My name is Nigel Millward and I’ve worked for National Highways since 2008. I am currently based at Chieveley (next to the M4/A34 junction) as a traffic officer.

Well, every day is different as there are a range of possible incidents we must deal with. Our priority at National Highways is keeping road users safe and traffic moving. My day usually starts with a team briefing where I meet with the other officers and am informed of any special events, ongoing incidents from the previous shift and news from National Highways departments.

We often discuss incidents we attended on our previous shift and typically there are points to reflect on. It doesn’t have to be a major incident for something to focus your mind. There are always points to learn.

After the briefing, the patrol vehicles are checked to ensure they are roadworthy. The team based at Chieveley covers the M4 from Membury services to junction 5 and we also respond to the A34 between Burghclere and Abingdon.

How do National Highways traffic officers keep traffic moving and road users safe on the A34?

The A34 can be demanding for the National Highways traffic officers. Incidents on the road can often quickly lead to congestion, creating difficulties for the traffic officers to get to the scene and to manage the incident. This causes delays to road users travelling to work, meeting with friends and family, and companies who rely on the well-functioning road network to keep their businesses running.

I remember recently helping a woman with her children because her tyre had blown. I jumped into action and slowed the traffic before bringing it to a halt. The driver had quite correctly, got herself and young children out of the car and safely behind a nearside barrier.

While a vehicle recovery service had been arranged, it was still some way off. I assessed the tyres on the car, and I noticed that the rubber was still on the rim of the wheel. To keep traffic moving and get them to a safe place as quickly as possible, I recommended that she and her children returned to the car and move slowly to a nearby garage forecourt, with me, in the patrol car, following behind, to protect her from faster traffic in the outer lane.

This enabled traffic to return to a normal flow much faster and most importantly, kept her and her family safe. Instances like this with flat tyres and breakdowns are a regular call, but in many cases traffic officers aim to assist in moving the vehicle to a safer location, rather than closing a lane.

What are the biggest challenges that you see on the A34?

The A34 is a very busy route serving the towns and communities throughout the region. It also links to the ports in the south around the Solent via the M3, to the west country via the M4, as well as to the M40 for traffic travelling north to the midlands. That means there is significant commercial traffic on the road in addition to smaller vehicles such as cars, vans and motorbikes. It can get especially busy during the holiday season as this increases demand on the road and there is a wider mix of driving experience.

There are often issues when road users fail to consider each other. For example, a larger vehicle ducking out into lane two with little warning and smaller vehicles not considering this possibility. It can lead to excessive emergency braking and increase the chances of collisions.

Frequently, when large vehicles are overtaking, they’ll come up against an incline and lack the power to complete the manoeuvre. If other drivers are close behind, they don’t have the opportunity to pull back into lane one, allowing faster traffic to pass. This causes congestion and frustration for all.

These are just two examples; many different factors can lead to incidents and collisions for all vehicle types.

Lastly, what is your favourite thing about your job?

For me, I love the variety. It’s great being out on the roads being able to use my knowledge and experience to reassure and help road users who are having difficulties.

A34 improvements north and south of Oxford

We are working with stakeholders and key partners so that their knowledge and experience of the A34 can inform our work. With this information we will identify options for improving the A34 that could make a real difference to people’s lives

If you are interested in the project and have any questions you can get in touch with the project team by emailing them at A34oxford@highwaysengland.co.uk. You can also sign up for project updates.