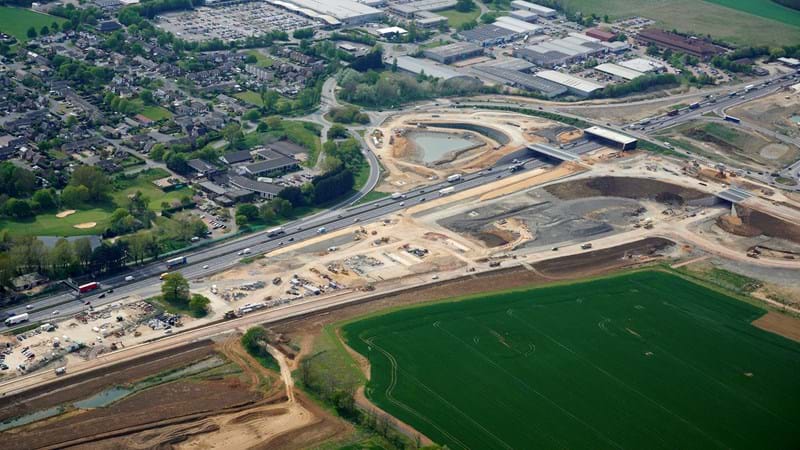 The country’s biggest road project takes a step closer to completion as one of the dozens of new bridges being built for it opens early next week (Monday 10 June).

The bridge is one of two that have been built in a redesign of the A14 junction at Bar Hill, which will see the previous lone bridge replaced by a duo to form a roundabout junction as befitting of a major trunk road on this £1.5 billion project.

Deputy project director for the A14 on behalf of Highways England, Julian Lamb, said:

“This epic project is taking its next step towards completion as we open yet another one of the 34 bridges we’re building for the new A14. Once fully completed, junctions like this one will ease congestion and improve traffic flow by providing improved access to and from the A14 as well as the local access road we’re building alongside it.

“We’re working hard to minimise disruption to drivers during this next phase of the junction redesign, and already have shown that here by dropping these bridges into place over one weekend rather than spending weeks building them over the road. This phase will see the accesses to leave and join the A14 change, and while we’ll sign this clearly, we want to make sure drivers are aware of the changes at this junction following this weekend’s work.”

The coming phase of this work will see just one of the two bridges open at junction 29, as work continues on the second bridge, the new local access road, and the new slip roads, ahead of the 21-mile upgrade opening by December 2020.

To safely carry out the switch from the old to the new bridge, the southbound lane on the old junction bridge will be closed this weekend. The closure will be in place from 9pm on Friday 7 June to 6am on Monday 10 June. Traffic wishing to access Bar Hill or the westbound A14 from the B1050 Hattons Road will be diverted to join the A14 eastbound, exit at Dry Drayton, junction 30, and re-join the A14 westbound. Access to and from Bar Hill will be maintained at all times.

When the new bridge opens, traffic will travel via the new bridge and the B1050 Hattons Road on a single lane in each direction, with a second, dedicated turning lane provided at the traffic lights. Traffic wishing to join the eastbound A14 at Bar Hill will do so by turning onto a short stretch of local access road at the traffic lights and joining the A14 via a temporary slip road. Traffic wishing to exit the A14 eastbound at Bar Hill will need to continue along the A14 past the old exit slip road (which will now be closed) and the new bridges, then turn off on the new temporary slip road to join the short stretch of local access road and access the B1050 Hattons Road.

The old bridge will then be demolished in a fortnight, with the A14 closed from 2am on Saturday 22 June until 11pm on Sunday 23 June. Once the old bridge has been removed, this will allow work to continue on the completion of the second junction bridge, the new local access road, and the new slip road, with further phases of work needed at a later date to complete this junction.

An additional bridge is also set to be built to allow access for pedestrians, cyclists and horse riders to cross the A14 at Bar Hill. This bridge will eventually connect with new paths alongside the local access road and the B1050 Hattons Road.

The two junction bridges, each weighing a thousand tonnes, were built beside the existing A14 and dropped into place while the road was closed for a single weekend last September. This innovative method of bridge building helped to minimise disruption much more than the usual way of gradually building the structure, with around a hundred lane and road closures avoided.

For more information and diagrams showing the new layout, read this leaflet.