The £1.5bn A14 Cambridge to Huntingdon improvement scheme includes a major new bypass to the south of Huntingdon and upgrades to 21 miles of the A14. Work officially started in November 2016 and the new road opened to traffic on Tuesday 5 May 2020. 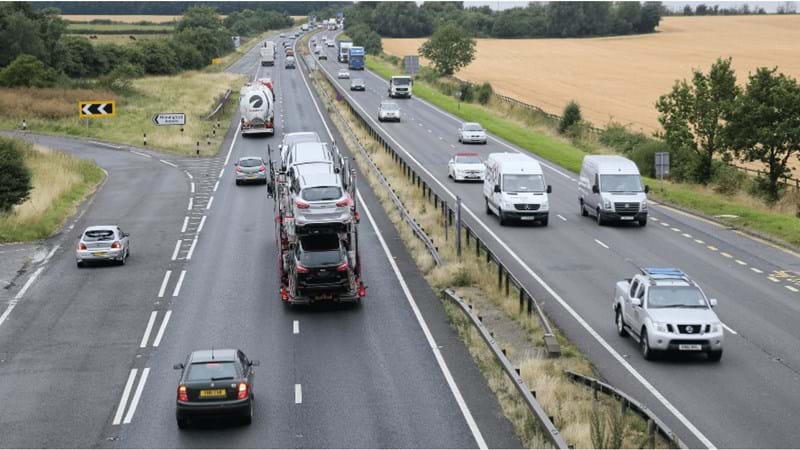 Benefits – the scheme is set to:

Why we needed the scheme

The A14 provides a vital road transport corridor between the West Midlands and East Anglia, and is of local, regional, national and international significance.

The section of the route between Huntingdon and Cambridge carries a high level of commuter as well as long-distance traffic and provides a strategic link between the A1 and the M11 motorway.

The A14 carries around 85,000 vehicles per day; 26% of this is HGV traffic (against the national average of 10%). It is frequently congested and traffic is often disrupted by breakdowns, accidents and roadworks.

A new 12 mile bypass to the south of Huntingdon

This removes a large proportion of traffic from the existing A14 between Huntingdon and Swavesey, as well as Brampton Hut and Spittals interchange.

It includes junctions with the A1 at Brampton and with the A1198 at Godmanchester.

A wider A1 between Brampton and Alconbury

Between Brampton and Brampton Hut we’ve constructed a new road to the west of the existing A1. The existing A1 road became part of the new A14 Huntingdon Southern Bypass.

Wider sections of the existing A14

We also widened one and a half miles of the Cambridge Northern Bypass between Histon and Milton.

Improved junctions on the A14

We improved junctions at Swavesey, Bar Hill and Girton to make sure they are compatible with new developments such as Northstowe. We’ve also improved connections for cyclists, horseriders and pedestrians.

We’re removing the A14 rail viaduct over the East Coast main line and Brampton Road in Huntingdon. A through route will be maintained through Huntingdon, making use of the Brampton Road bridge to cross the railway line and constructing a new link road from Brampton Road to connect with the A14 to the west.

Once work is complete the existing A14 will be ‘de-trunked’ between Huntingdon and Swavesey and between Alconbury and Spittals interchange. This means that responsibility for the road will pass to the local authority.

Read more about our work in Huntingdon.

We built a new single carriageway between Swavesey and Girton, approximately five and half miles in length and linking to the A1307 (old A14) between Godmanchester and Swavesey. This provides a route for local traffic between Cambridge and Huntingdon, as well as access to properties and businesses along the corridor.

Section 1 Map – A1 between Alconbury and Brampton Hut