We’re improving the A303, A358 and the A30 as part of a wider plan to improve connections between the south-east and the south-west of England.

Why we're making these improvements

The A303/A358 is a main route, running across the country. It links the M3 in Hampshire and the M5 in Somerset, passing the world-famous Stonehenge monument through the surrounding World Heritage site. Around 26,500 vehicles use it on an average day - and many, many more during the summer months. It’s well known for being an unpredictable route, with accidents and congestion causing delays. To address this, we’re dualling the road in certain places to make it safer and better able to cope with the traffic that uses it. We have one scheme in construction and two in development on this corridor. 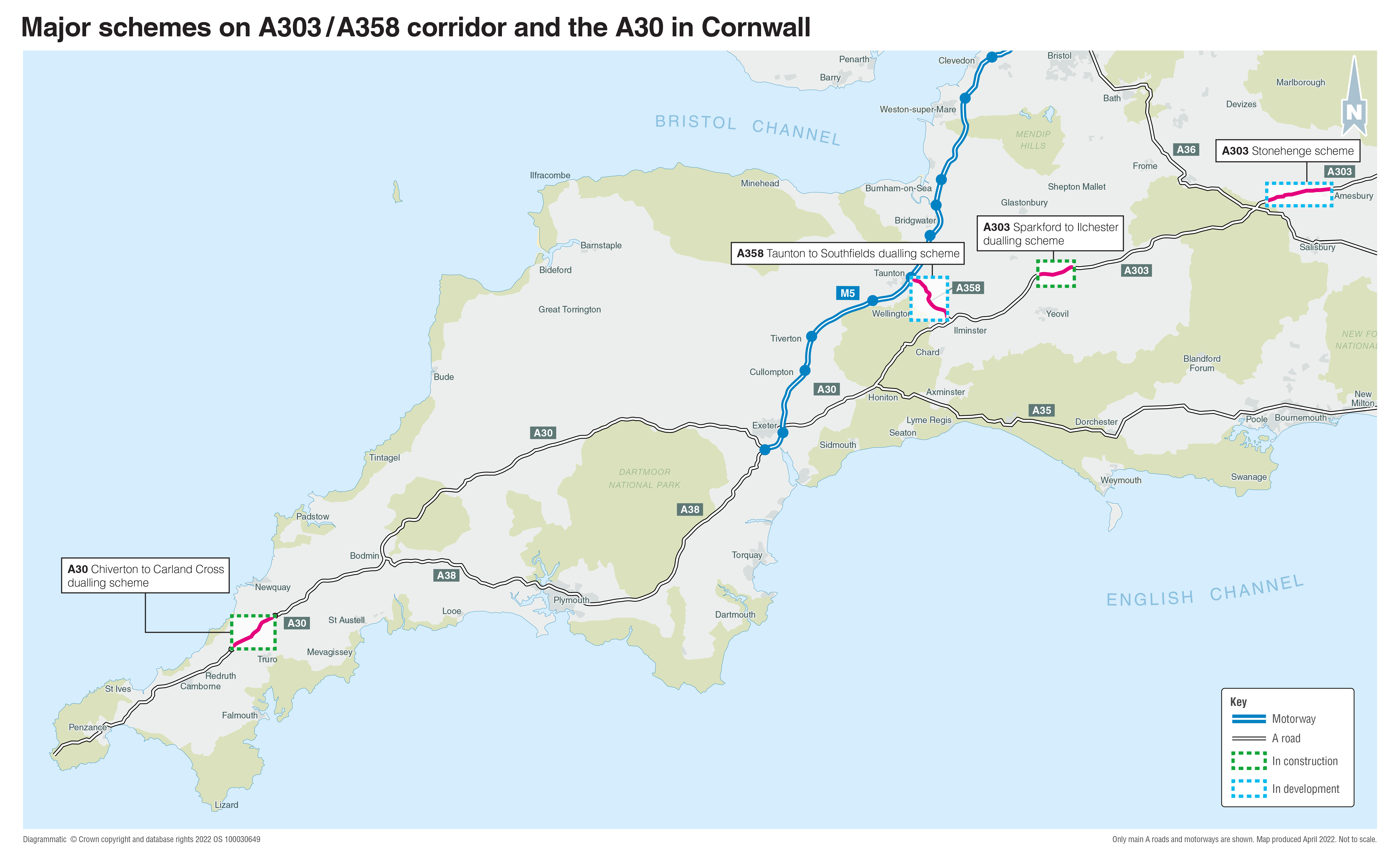 The A358 connects the A303 to the M5 at Taunton. It’s an important part of the jigsaw in improving links between the south-east and south-west, because improvements here will reduce traffic through the Blackdown Hills Area of Outstanding Natural Beauty and make the route between the M5 at Taunton and the A303 more reliable.

Improving the A30 between Chiverton and Carland Cross is really important for Cornwall’s future. We’re currently dualling the only remaining stretch of single carriageway on the A30 between Camborne and the M5 at Exeter. It’s designed to fix the problems with congestion that have delayed journeys for decades, leaving traffic at a standstill and hampering the Cornish economy.

A303 between Sparkford and Ilchester in Somerset

Features of the scheme:

We’re building a new 3-mile section of dual carriageway. This will start east of Podimore Roundabout and once finished the new route will bypass the existing Hazlegrove Roundabout. The new road is being built away from the existing A303 but it will cross and tie into the existing road in certain places.

Our aim is to keep one lane of traffic on the A303 open in each direction during the works - which is the same as before work started. When it's finished, there will be two lanes in both directions.

During the works, there will be times when we’ll need to close the road overnight, such as when we lift new bridges into place. Some local road arrangements will also change, so it’s important to check how this might affect journeys to tourist destinations.

A30 between Chiverton and Carland Cross in Cornwall

Features of the scheme:

We’re building a new 8.7-mile section of dual carriageway. It’s being built away from the existing road, but will tie into the current A30 at Chiverton Cross and Carland Cross roundabouts. These roundabouts are being rebuilt as part of the work. Once finished, they’ll be split level junctions, which means that only traffic leaving or joining the A30 will need to use them.

You’ll probably see some road building activity if you drive along the A30 in Cornwall. We’re doing what we can to keep traffic moving along the route during the works. Our aim is to keep at least one lane of traffic open in each direction during the works – which is the same as before the work started.

Some local road arrangements will change over time, so it’s important to check how journeys you might have made in the past might be affected.

We’re continuing to work on the A358 Taunton to Southfields scheme and the A303 Stonehenge scheme. They’re not in construction yet.

Why is it important to improve these roads?

Local councils and business leaders agree that upgrading these roads to dual carriageway will connect the south west better to neighbouring regions, helping the region to grow and supporting plans for more homes and jobs.

When will the whole corridor be improved?

In 2014, the government set out its goal to improve the connections between the south east and south west, but delivering it will take some time. Several other points along the A303 / A358 have been highlighted for possible future development.

Ultimately, the Department for Transport will decide if and when it wishes to progress the remaining schemes and the timelines for these.

These decisions are taken through the Road Investment Strategy, which is the government’s rolling five-year investment strategy for the strategic road network.

Do you run a tourism business in the south west?

Find out more about each scheme below: