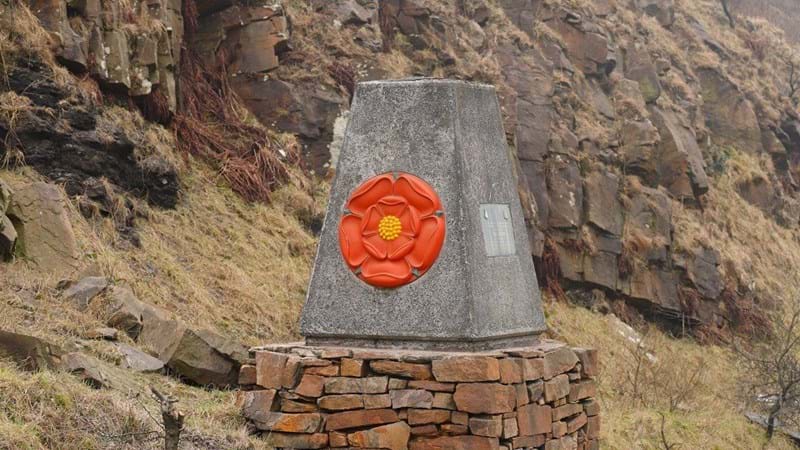 We've welcomed historic listing status for two ‘pyramidal’ stones along the M62 marking the border between the old rose counties of Lancashire and Yorkshire. 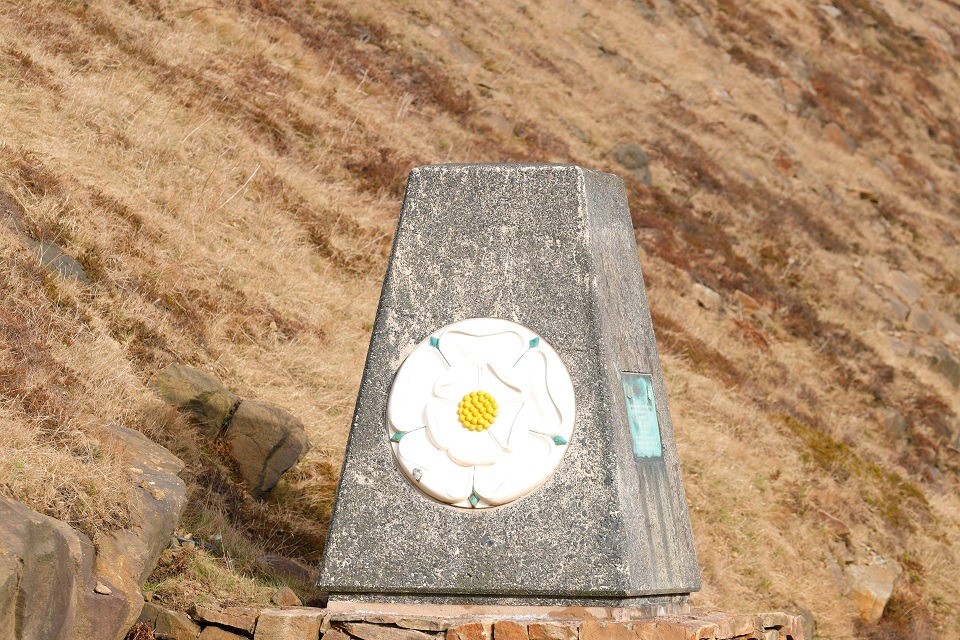 Caption: Drivers heading along the eastbound M62 away from Manchester towards Huddersfield are greeted with the white rose of Yorkshire just before the exit slip road at junction 22

The two stones were unveiled by the Queen in 1971 to mark the completion of the cross-border section of the motorway between Milnrow near Rochdale in Greater Manchester and Outlane near Huddersfield in West Yorkshire.

Each of the border stones carries a plaque to commemorate the completion of the project and a large white or red rose marking the boundary between the old counties of Lancashire or Yorkshire - a reminder of the historic rivalry between the Wars of the Roses houses of York and Lancaster. The markers further reference the motorway’s surroundings through the use of local Pennine aggregate and stone in their construction. 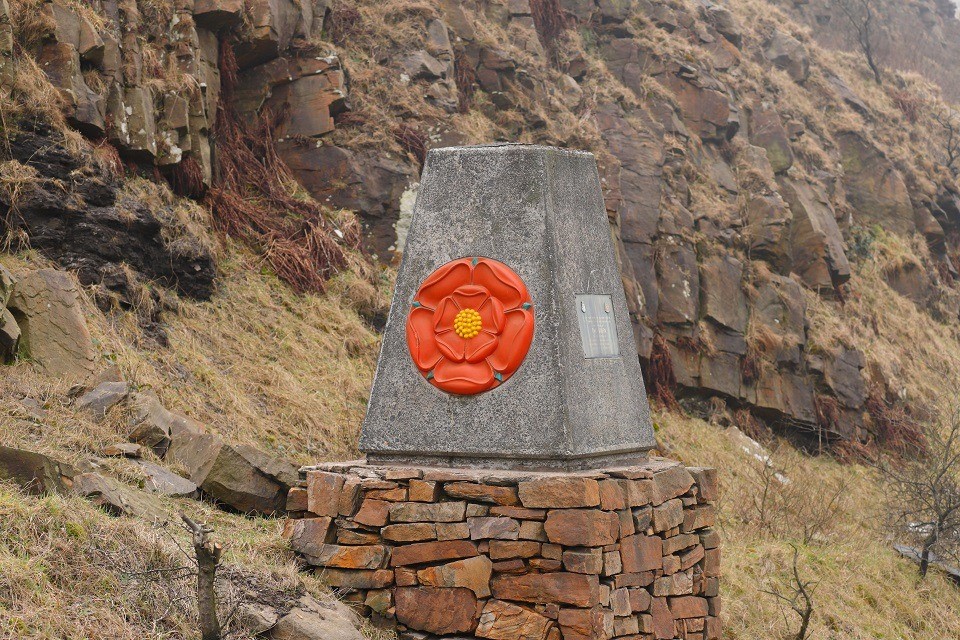 Caption: Drivers heading along the westbound M62 from Leeds towards Manchester are greeted with the red rose of Lancashire on the border of two old counties just after junction 22 of the motorway

Our regional director for the North West, Alan Shepherd, said: “Cultural heritage and conservation is important to National Highways and we are always willing to work with stakeholders such as Historic England to ensure we preserve sites of special historic or cultural interest near our roads.

"It’s very pleasing to have these marker stones listed – it’s is a tribute to all those roadworkers in the ‘50s and ‘60s who paved the way for our 21st century motorway network.”

And Simon Boyle, our director for Yorkshire and the North East, said: “Tens of thousands of drivers use the M62 every day. It’s a lifeline for communities and an artery of the economy.

"We’re delighted the boundary markers between the old red rose and white rose counties have been recognised in this way.”

The M62 now runs between the port cities of Liverpool and Hull linking other major towns and cities like Warrington, Manchester, Leeds and Huddersfield along the way. It plays a vital role in the economy of the North and the rest of the UK.

It is the only trans-Pennine motorway in the country. A road sign at Windy Hill, within the cross-border section between junction 21 and junction 22, also marks the highest point of any motorway in England at 372 metres (1221 feet) above sea level.

Historic England announced yesterday (Tuesday 24 May) the marker stones had been given Grade II listed status to celebrate the Queen’s Platinum Jubilee. Five buildings across the country, including the Sun Pavilion and Colonnade elsewhere in Yorkshire at Harrogate, have also been listed.

Historic England’s M62 listing is not the first time a spotlight has fallen on historic marker stones along our strategic road network.

Two years ago, as part of the Government’s road investment strategy (RIS), we completed a £5.2 million programme of environmental improvements across the North West – including the restoration of historic milestones in Cumbria.

A five-year programme of biodiversity, landscaping and heritage works included renovating a marker stone along the trans-Pennine A66 right on the ancient border between Cumbria and Durham. 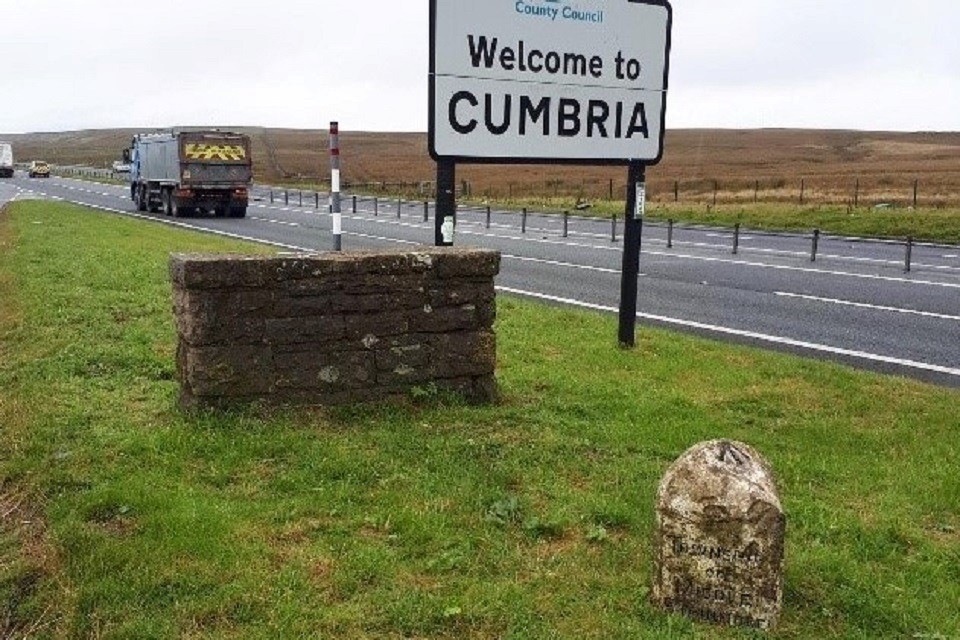 Caption: Our heritage conservation work along its road included restoring this A66 boundary marker between historic Cumbria and County Durham

Other work along the A66 included enhancing the environment around local landmarks like the 17th century octagonal sandstone Countess Pillar near Penrith, replacing a missing 19th century milestone near Whinfell Park and restoring a second historic – and heritage listed - milestone near Crackenthorpe Hall.

The heritage work was part of a wider package of projects from special ring-fenced ‘designated fund’ for environmental improvements in the Government’s 2015 to 2020 road investment strategy (RIS) – renewed for a further five years in 2020 with £936 million for the overall designated funds programme.