A11 concrete surface repairs and maintenance

We'll be reconstructing sections of the road, as well as carrying out repairs and maintenance on other stretches of the A11 carriageway between Spooner Row and the Thickthorn Junction in both directions. Work will take place during 2021, 2022 and into 2023 and will be undertaken in two phases. Phase 1, A11 Tuttles Interchange to Thickthorn started in October 2021 and was completed in February 2022. Phase 2 includes the A11 Spooner Row to Tuttles Interchange and started on 29 May 2022.

The surface of concrete roads, that were mostly designed between the 1950s and 1970s, have an average life span of 50 years. Their surfaces are now reaching the stage where they will need to be repaired or replaced for safety reasons, and to help them be less noisy and better to drive on.

The East region has the highest concentration of concrete roads on our road network, including the A11, A14, A12, A120 and M11.

We’ll be using new ways of working and innovative technology to provide a modern road that will last for decades to come. This will also make it easier and quicker for us to carry out repairs in the future and create roads that are less noisy and better to drive on.

To find out more about our nationwide Concrete Roads work please visit our programme page.

To find out more about the A11 Spooner Row to Tuttles Interchange reconstruction scheme, please read our latest newsletter.

In the project update below, you’ll find an opportunity to complete our feedback form (ECHO). ECHO uses an interactive map that allows you to click on a location to make a specific comment and has the option to give us your general feedback about the scheme.

ECHO is a one-way feedback tool, so if you’d like a response to your feedback you can email us at: info@nationalhighways.co.uk or call 0300 123 5000

We’ve also set up a free SMS alerts service that’ll be used to warn recipients of incidents on the A11 that will affect morning or evening peak time travel, as well as general scheme updates. To sign up for this service please send your telephone number to info@nationalhighways.co.uk and reference the A11 SMS service.

Our road replacements will provide safer and better road surfaces, as well as a smoother and a quieter journey for road users on the A11. Replacing the old surfaces with a new, modern road surface will extend the life of the road by up to 50 more years and make it easier and quicker for us to repair in the future, reducing the disruption to journeys. 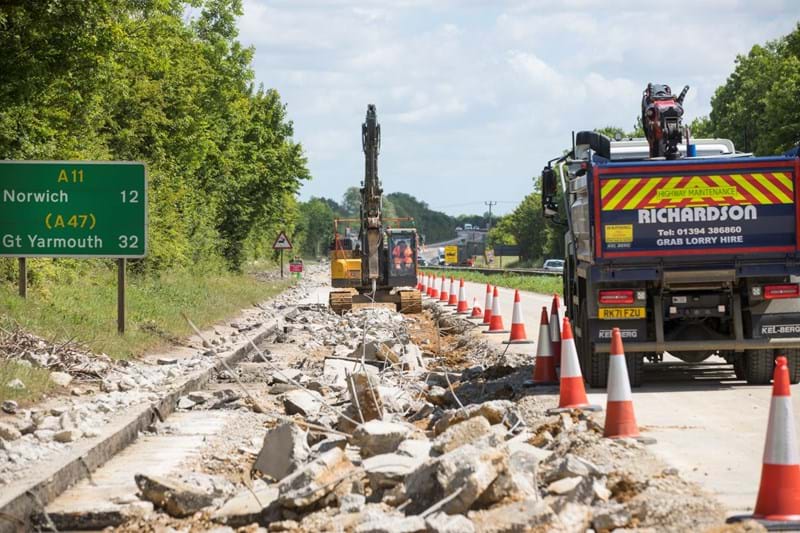 Excavator working to break up the existing concrete road 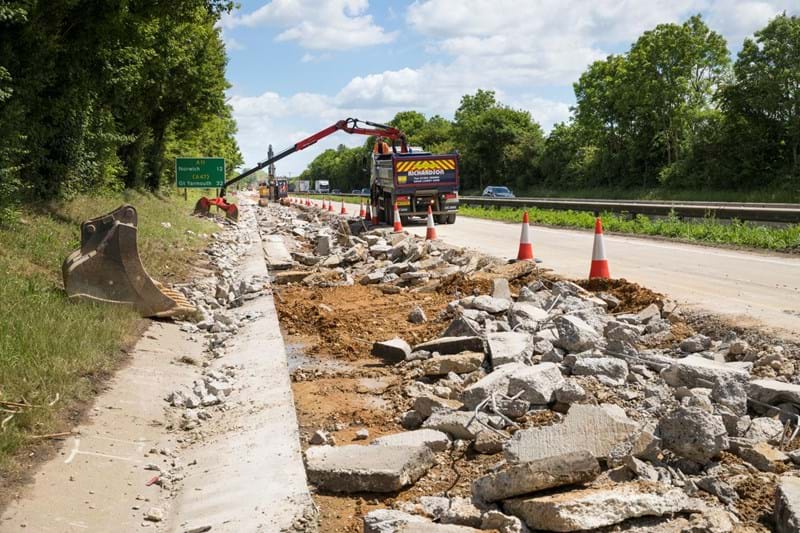 Break up and removal of existing concrete using a grab-lorry 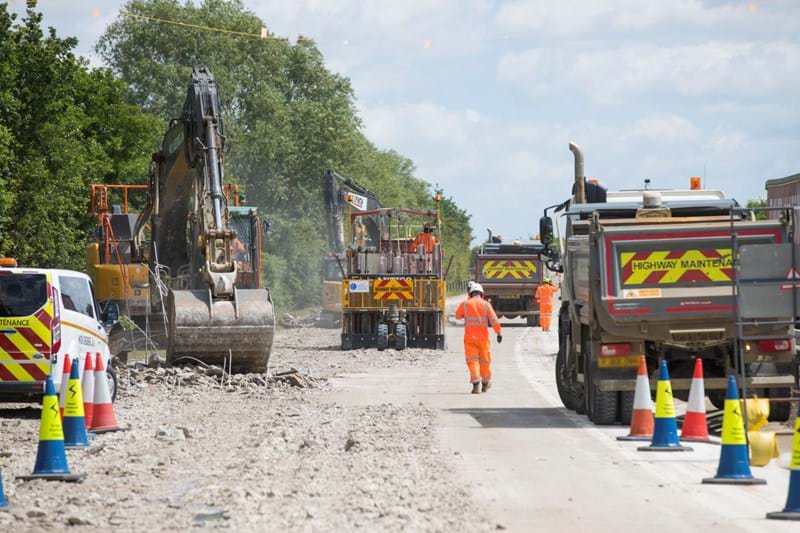 An Antigo Breaker, specialised equipment, breaks up the concrete before it is removed by excavators 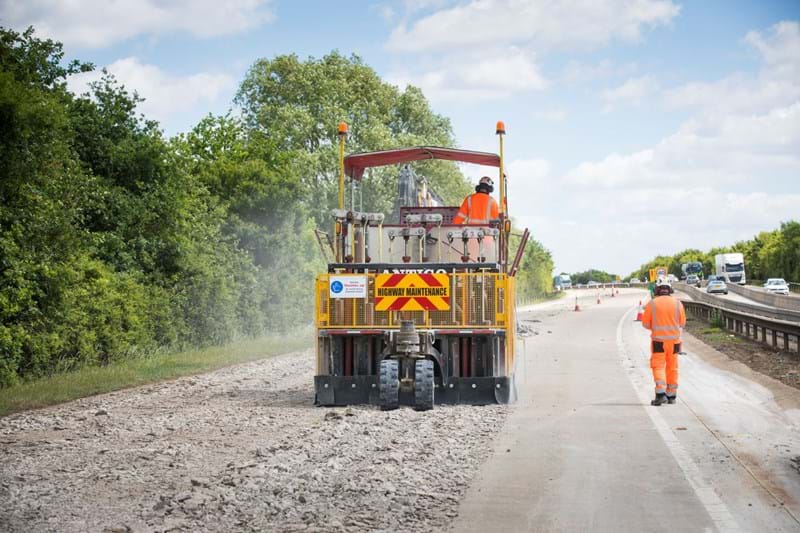 We'll be carrying out the reconstruction of the carriageway on the A11 between Spooner Row and the Tuttles Interchange in both directions.

The scheme uses a contraflow system to keep the A11 open during the reconstruction of the road. This will mean that the carriageway will be reduced to one lane in both directions as we work, whilst the speed limit will be reduced to 40mph in order to ensure the safety of our workers and the travelling public.

We’ve tried to keep local traffic on the A11 during the construction of the scheme, but this isn’t possible due to safety reasons. We’ve also tried to find a balance in serving through traffic on the A11, as well as the needs of local road users, but we’re aware that our roadworks will cause delays on both the A11 and on local roads during peak morning and evening times.

The maximum expected delay for traffic travelling along the A11 between Spooner Row and the Tuttles Interchange during the construction of the scheme will be an additional:

• Max delay of 14.1 mins for traffic travelling northbound on the A11 during peak times.

It’s also important to note that some slip-roads will be closed for extended periods during the construction of the scheme. These are shown in the following diagram: 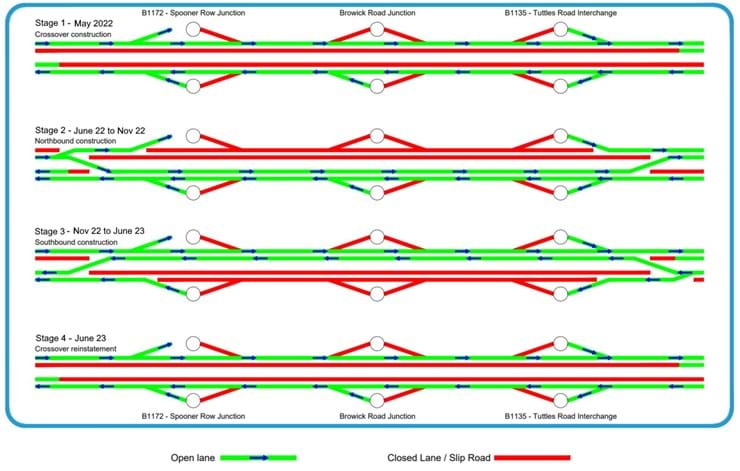 We’re encouraging through traffic to use a dispersal route, which avoids the A11 altogether, so that local roads can be kept free of A11 traffic and avoid congestion on these roads. We’re also continuing to engage with the local and wider community throughout the construction period, ensuring everyone is fully informed so they in turn can make an informed decision about their journey. 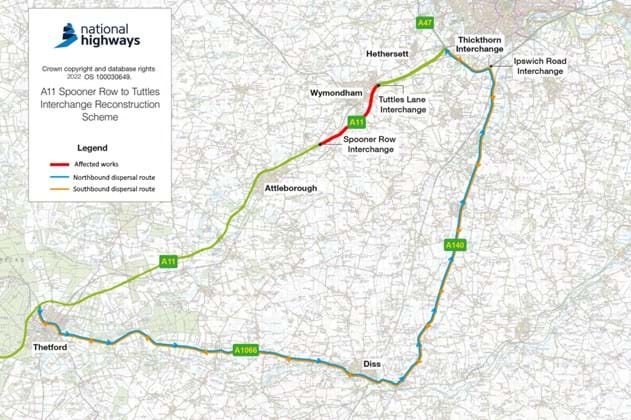 We are currently working on the northbound side of the carriageway (Stage 2 of the construction diagram), with a programmed completion date of November 2022 for this section of the scheme.

Why are certain slip roads closed?

We’ve had to close some of the entry and exit slip roads between Spooner Row and the Tuttles Interchange for two reasons:

Why is there a 40mph speed limit?

The 40mph speed limit is in place for the safety of road users, and our workers. We’ve undertaken a number of safety assessments, which have shown that 40mph is the highest, safest speed limit to be used within the roadworks.

What happens when there’s a breakdown in the single lane road works?

We provide a free 24/7 recovery service within the scheme. There are 23 cameras along the length of our roadworks that allow us to quickly identify stranded vehicles. They in turn alert our recovery team, who then travel to the stranded vehicle within our works, before removing them from the single lane of traffic using one of our access gates in the temporary barrier and delivering them to a place of safety away from the scheme.

What happens when an emergency vehicle needs to travel along the single lane road works?

We provide permission for emergency vehicles to drive within our sectioned off working areas when responding to an emergency, which allows them to quickly bypass any congestion.

Give us your feedback

Please let us know what you think by using ‘ECHO’, our A11 concrete surface repairs and maintenance feedback tool. ECHO uses an interactive map that allows you to click on a location to make a specific comment and has the option to give us your general feedback about the scheme.

ECHO is a one-way feedback tool, so if you’d like a response to your feedback you can email us at: info@nationalhighways.co.uk or call 0300 123 5000. 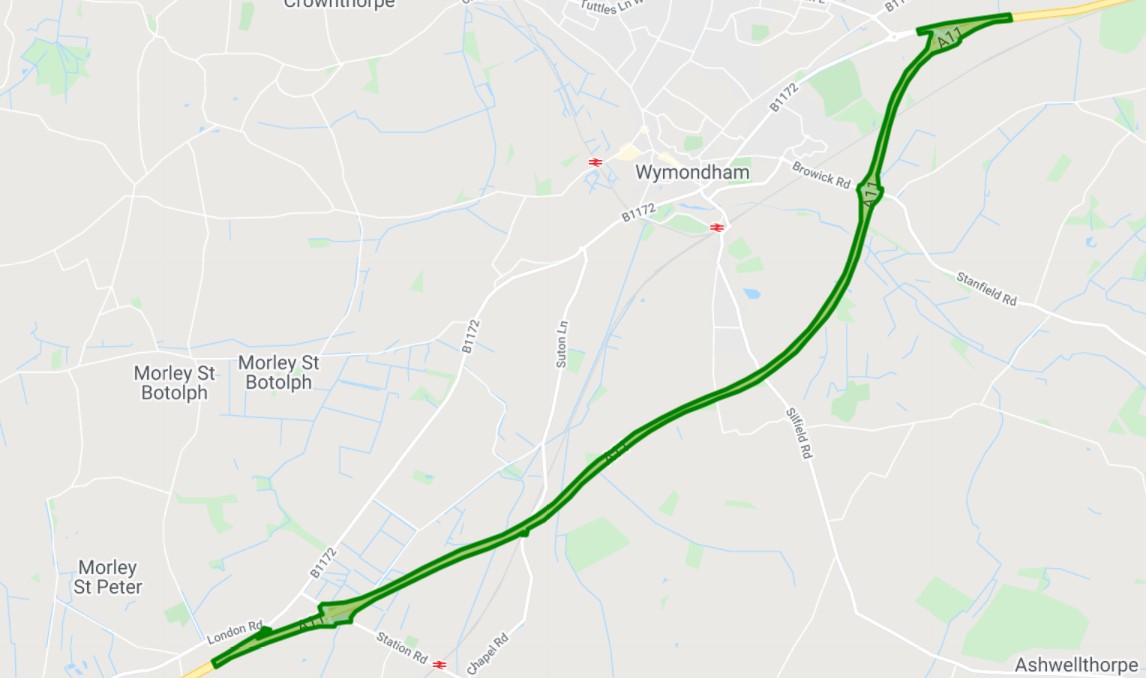 We carried out repairs and maintenance on the A11 carriageway between the Tuttles Interchange and the Thickthorn Junction in both directions, between October 2021 and February 2022.

Our road repairs have extended the life of the road surface by up to 10 more years, creating a safer road that will also require less maintenance, resulting in fewer roadworks along this section of the A11.

A11 Spooner Row to Tuttles Interchange project newsletter: May 2022