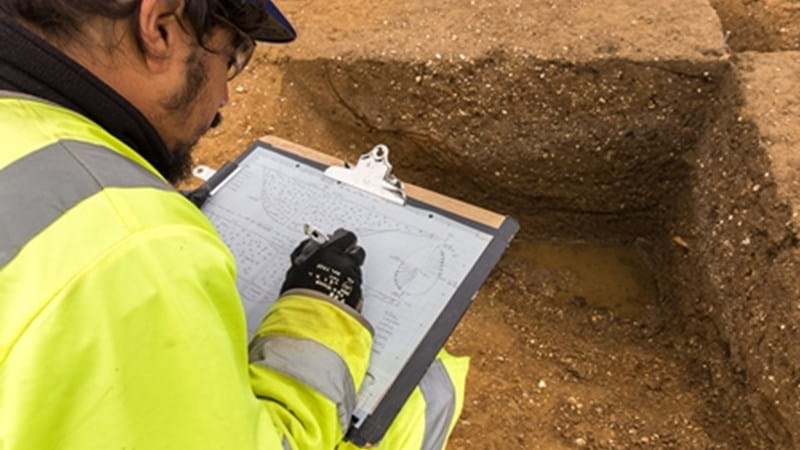 This is the second in a series of conversations between National Highways Cultural Advisor, Jim Hunter and independent archaeologist, Mike Pitts. With their combined 30 years’ experience in heritage, we joined them for a walk around the Stonehenge site to learn more about the upcoming archaeological works.

Mike Pitts (MP): There will be excavations in and around the World Heritage Site associated with the roadworks. Now, excavations are how archaeologists learn about the past. Will the public be able to learn about what’s being found?

Jim Hunter (JH): Absolutely. At National Highways, we’re committed to involving the public as much as possible in the work that we do on archaeology. We’ll visit schools, write blogs, post on Facebook and Twitter. This is going to be an opportunity for the public to engage with archaeology and let their imagination be fired by it.

MP: From the work you’ve done before any of the construction works starts, what do you expect might be found in the excavations that are going to take place?

JH: We have found some flint tools and pottery from the Bronze Age and some interesting but infrequent burials. We mostly expect to find signs of day-to-day life in the ground, like pits and ditches where buildings may have stood.

MP: So, in your preliminary investigations you find scattered tools and bits of pots. If you were then to go and look further, you expect to find the features - that is, the homes or buildings these artefacts have come from?

JH: Yes. We found some of those features too in the trial trenches. What National Highways tried to do is find a route that disturbs as little of that as possible, and definitely doesn’t go through the bigger monuments like the barrows.

We believe that the people who built and planned Stonehenge thought the barrows were important. They buried their dead here and returned again and again, so it’s important to be respectful of that.

MP: And I think it’s important to make the point that these excavations won’t be done by road builders, they’ll be done by archaeologists.

The only difference between these excavations and excavations like my own that have taken place at Stonehenge, is who is paying for them. In this case it’s National Highways rather than a university, but the archaeologists doing the work are as experienced and skilled as any you’d find anywhere in the world.

Mike Pitts is an independent archaeologist, freelance journalist and author of Digging up Britain. He first worked in the Stonehenge landscape in 1979 and can be found online at mikepitts.wordpress.com or on Twitter @pittsmike.